The assessment, work in the yard… Quite a lot of time went by between the incident in the Transat Jacques Vabre and getting Safran back in the water. How did you feel during that period?
Morgan Lagravière: “It’s only natural that I felt some frustration. But it was vital to take our time to determine the causes of the damage and then get the repairs done and reinforce the boat. We couldn’t cut corners. With IMOCA projects, you have to get used to spending a lot of time ashore, unlike in the Olympic series, where you can sail all 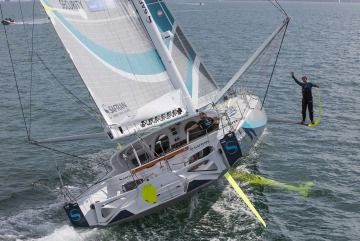 © Jean-Marie Liot / DPPI / Safranthe time and even in the Figaro, where the interruptions are much shorter… Having said that, I was busy during those months while the assessment was being carried out and the work was done. I was able to bounce back after the Transat Jacques Vabre by completing the Saint Barth/Port-la-Forêt with an IMOCA we chartered. It’s true that I wasn’t aboard my own boat, the one that I spent so much time on in the preparation races in 2015. This experience was no less exceptional. Including the delivery trip, I sailed twice across the Atlantic, which means 10,000 miles, or a good third of the Vendée Globe. In the first part of the race, I was in race mode. Then I shifted to crisis management mode with a keel that was pretty useless. The low we encountered in the crossing was among the worst conditions you can get in sailing around the world. During the St-Barth/Port-la-Forêt, I had to deal with a ton of difficulties and learnt a lot, even if it meant suffering. Suffering is part of the exercise of solo sailing on an IMOCA. After this race, I did some courses (dealing with the weather in particular), and continued my physical training, while monitoring the work being done on Safran and I also sailed on boats that are easier to access like a foiler moth. I also took advantage to take a step back from my project and relax with the family. It was a good way of recharging my batteries and returning with a lot of enthusiasm.”

It must have been great seeing Safran back in the water…
“Yes, I was really pleased. The relaunch went to schedule thanks to the hard work done by the technical team, who had a  lot of work to do, which was demanding and not always very pleasant. It’s the end of a tricky period and above all the start of a new phase full of sailing trips, talking things through with the team and battling it out with my future rivals as we approach the Vendée Globe.”

“Everyone accepted their share of the blame for the damage”

What do we know about the ingress of water that occurred in the Transat Jacques Vabre? What did the assessment determine?
“In general, we understood what happened in terms of the dynamics. Safran was the first of the new generation boats to enter the water, the first IMOCA to use foils (which led to new strains on the structure), and the one, which at the start of the Jacques Vabre had sailed the most. She took the brunt of the problems. As for the damage, no one has really been accused. Designers, the yard, the shore team and myself… we each accepted our share of the blame and asked ourselves what to do next. Personally, I’m going to have to ease off maybe in certain conditions…”

What work has been done to Safran to reinforce her and make the structure more reliable?
“Firstly, we had to repair the boat, which arrived home in a sorry state. The work then involved reinforcing the structure of the hull adding additional supports. We “concreted over” the areas where there are huge strains, which we identified beforehand. At the same time as repairing and reinforcing her, the team also set about improving her and checking everything. In the yard, all the different parts were taken apart, as they were easily accessible. It was a good time to check the cables, deck hardware, the mechanical parts in the engine and many other things too…”

The idea now is to sail as much as possible and gain experience to build up your confidence?
“Exactly. In theory, when I listen to the designers and the yard, I feel confident. Safran has been well repaired and reinforced. But I will only really be reassured, when I have done a lot of sailing on her in extreme situations. I have to know that this boat can get through anything and that her structure is solid enough to give me 100% of what she has to offer without too much stress, so that I can get her around the world. Getting in as much sailing as we can is important for the boat, but also for me. I have certain qualities, but also some weaknesses I need to deal with gaining experience before the Vendée. There is going to be a solid programme with two courses in Port-la-Forêt in April. Then, I shall set off on a 1500 mile solo course in order to complete my qualification for the Vendée Globe. After that, there will be the delivery trip with a crew to New York. And on 29th May, I’ll be lining up at the start of the New York/Vendée transatlantic race, the final battle before the round the world race. That is going to be a big one for me sailing solo, the dress rehearsal. The race against the clock before the Vendée Globe is ticking, but we have all the ingredients to manage to prepare well. We’ll be making the most of the few months that remain and will be hard at it.”

“With my team, we can achieve big things”

We get the impression that this is a new beginning…
“That’s what it is. That’s down to the fact that a lot is changing. I have a new technical team and the boat is now based in Concarneau and no longer in la Trinité. I’m starting a new season, which is more focused on solo sailing. I get the feeling that this is not the same project as last year.”

You seem to give a lot of importance to the team alongside you…
“In this project, there is a real human dimension, which is vital for me.  Feeling I have this team at my side is an added motivation. It’s great that we can spend time together, happily working and with the aim of doing well. This positive attitude convinces me that with my team, we can achieve big things.” 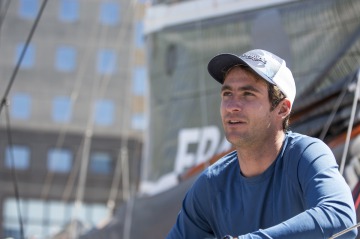 © Mark Lloyd / DPPIIt’s now Roland Jourdain, through his Kairos company that is managing the Safran project. What is Roland, who has competed twice in the Vendée Globe bringing to you?
“A lot of things. We all love his upbeat approach to life. He is always cheerful. Roland wants to share his incredible know-how. His experience is very precious. He gives us a structure and manages us from a technical point of view. And Bilou helps me too on a human level. He is allowing me to grow up. I learnt a lot alongside him in the delivery trip across the Atlantic before the St-Barth/Port-la-Forêt. Once alone in the race, I felt I could hear him telling me things and I repeated his little sentences and went through his advice to do things in the right order.”

You’ll be setting out alone for three months at sea as you sail non stop around the world without assistance aboard a fighting machine… This is a huge challenge. How do you feel about that leap into the unknown?
“I don’t feel any particular worry, as I don’t know what I’ll be facing. I don’t want to get stressed about that. Of course, I have talked to other sailors, who have already been through this experience, starting with Bilou. But I really want it to be a surprise. When you discover something, that’s when you get the most out of things. The idea of something new excites me a lot. I don’t see it as a constraint, or a brake, but rather as a source of motivation. In the last race, François Gabart showed that it is possible to discover the race course and still have a very good Vendée Globe…”