Well organised with a carefully tuned job list he is already well acclimatised to the heightened atmosphere pre-start. "It's all OK. I hide behind other goldfish." Heerema quips, "It is pretty much as I expected here. I was told how it would be and that is the way it is. I am enjoying it absolutely. It reminds you how big this great event is. So many sailing events do so much chest beating to get a few boats on the start line. Here we have nearly 30 boats and there will be hundreds of thousands of people at the start," points out Heerema.

His objective is to sail once a week in the remaining period before the start, just validating and checking small things done to No Way Back, his latest generation VPLP-Verdier design which was built by Persico in Italy.  "Things are perfect really.  We are finally getting towards the end of the job list. We will sail once a week just to verify things and make sure everything is working smoothly, like leading a couple of halyards and making marks on them, things like that. We have nothing major to complete."

Compared with some of the other skippers in the race Heerema's project started relatively late. His boat was only launched in August last year, originally as Andrea Mura's Vento di Sardegna. After Mura was forced out because of lack of funding Heerema took on the potent machine. But he considers himself as ready as he can be. "Give me another six months! But that is what everyone says about any sailing project, you'd always like more time. You never feel like it is really finished. I would have liked to do more sailing but I have done enough, but I am happy with how far I have come." 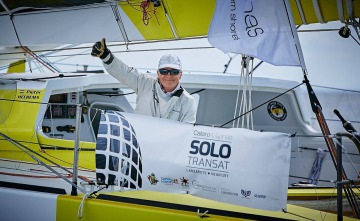 © No Way BackHe remains totally objective about the challenge that faces him.  His biggest worry? "A serious mechanical failure that would put me out the race. Everything is so light and marginal, it is extreme. So to have something maybe costing five euros break and bring you to your knees, that would be my biggest worry."

His schedule to the start line is fully allocated.  "Some of my time is spent answering questions like this. But the biggest job right now is stacking and storing stuff on board. You need to know where it is and be able to put your hands on it in forty days time, in the dark." Meantime on land he keeps up his strength and fitness routine, like many skippers, he is content that he is the strongest and fittest he has been, ready to face the physical and mental extremes.  "Now it is just maintenance. It is just a bit of running or exercise each day keeping the machine in order. I have built up systematically over quite a long time and so I am feeling good."