Alan Roura continues the Swiss tradition in the Vendée Globe

This is the story of a small country, which has no sea borders, but is clearly a nation not to be overlooked in offshore racing circles and in the Vendée Globe in particular. Save for 1989-1990 and 1996-1997, there has always been at least one Swiss (or Franco-Swiss) sailor at the start of the solo round the world race without stopovers. This year, Alan Roura takes up the baton, following on from Bernard Gallay, Bernard Stamm and Dominique Wavre who have gone before.

In just two weeks’ time, on 6 November, Alan Roura, 23, will honour a series of illustrious predecessors by taking the start of the eighth Vendée Globe. In seven editions of the non-stop solo round the world race, on five occasions, one or more Swiss sailors have set out from Les Sables d’Olonne (one in 1992-1993, three in 2000-2001, one in 2004-2005 and two in 2008-2009 and 2012-2013). Bernard Gallay, Dominique Wavre and Bernard Stamm together have clocked up a total of nine attempts at the Vendée Globe. We get the low-down on their participations, which have certainly been memorable to say the least…

In 1989-1990, 13 sailors lined up for the start of the first Vendée Globe: ten Frenchmen and three from outside of France, but no-one representing Switzerland. In the second edition, in 1992-1993, the Franco-Swiss sailor, Bernard Gallay became the precursor of the wave of Swiss sailors in the Vendée Globe. This former professional rugby player made it around the world although he was not ranked due to two stopovers after autopilot problems and structural worries with his rig. Half of the solo sailors were ranked in this second edition, which was particularly testing and marred by the loss of the British sailor, Nigel Burgess… 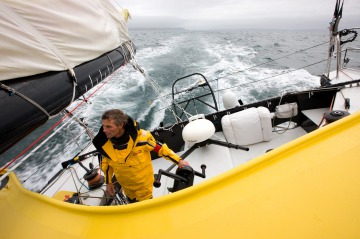 We had to wait eight years for the next Swiss entrant and then there were three setting sail from Les Sables d’Olonne – a record. Bernard Gallay was back, accompanied by two other skippers, who would leave their mark on the Vendée Globe: Bernard Stamm and Dominique Wavre. Preparing for the 2000-2001 race, Stamm carried out a huge amount of work building his boat in the Breton port of Lesconil. He built his 60-foot monohull with the support of locals. This led to the creation of Superbigou, a boat that was to become emblematic, and which was to remain with the Swiss fraternity, as we shall see later… It was a great story, as Bernard Stamm made it to the start of the non-stop solo round the world race. But unfortunately there was no happy ending, as he was forced to retire after a week of racing with rudder and autopilot problems.  The other two Swiss sailors were more successful. After 105 days at sea, Dominique Wavre became the first Swiss skipper to complete the non-stop solo round the world race. He finished in fifth place behind some prestigious sailors, Michel Desjoyeaux, Ellen MacArthur, Roland Jourdain and Marc Thiercelin. Six days later, Bernard Gallay also completed the race in eighth place. Two out of three made it to the finish, which was a positive outcome for the Swiss.

After retiring during his first attempt, Bernard Stamm prepared for another go. In the meantime, he won the solo race round the world with stopovers (Around Alone 2002-2003), winning four of the five legs. So it looked like he would be in good shape for the Vendée. But just a few months before the start, his faithful Superbigou upset his plans, when she lost her keel in the transatlantic race from Plymouth. Time was tight and Bernard Stamm was unable to get her ready to compete in the Vendée Globe… Dominique Wavre was there once again aboard a fine-tuned IMOCA he knew well. The result lived up to his expectations and hopes, as he shaved thirteen days off his previous time from 4 years earlier. He finished in fourth place after 92 days at sea, 5 days after the winner, Vincent Riou. 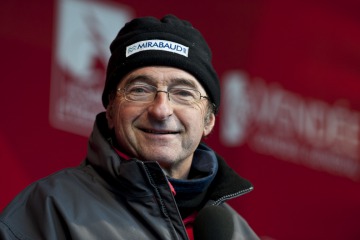 Thirty skippers took part in the 2008-2009 Vendée Globe with a good number of non-French sailors, as there were no fewer than 13 at the start, including Bernard Stamm and Dominique Wavre. After once again winning the solo round the world race with stopovers (the 2006-2007 Velux 5 Oceans), Bernard Stamm had everything in place to secure a good result aboard a Farr design from 2003. But on the first night he collided with a cargo vessel and had to return to Les Sables d’Olonne to repair his mast and bowsprit. He set off again, but there were more adventures to come… In the Southern Ocean, and in particular in the Indian Ocean, both Swiss skippers suffered. Dominique Wavre had a problem with his keel head and decided to head for the Kerguelen Islands to carry out repairs. His pit stop coincided with another incident involving Bernard Stamm. He too headed for the Kerguelen Islands with damage to his rudder bearings. His boat, caught in severe gusts, was washed onto the rocks, in spite of some help from Dominique Wavre. The adventure ended there for Stamm. After makeshift repairs, Wavre set off again, but his keel head broke again. He continued to Australia in spite of the threat that his keel would break at any time. By then though, he had no other choice but to throw in the towel.

In 2012-2013, the pair was back for more. Bernard Stamm was this time on a new generation 60-foot IMOCA specially designed for him. He was soon to suffer from problems with his hydro-generators. He carried out some DIY repairs, but was forced to carry out a pit stop in the Auckland Islands to ensure the system would hold out. The pit stop did not go as planned. Cheminées Poujoulat dragged her anchor and Bernard had to moor up to a Russian scientific vessel. Without warning, a member of the Russian crew jumped aboard Stamm’s IMOCA to help him manoeuvre. The Swiss skipper was disqualified, with the Jury considering this to be assistance. Like Bernard Gallay twenty years before, Bernard Stamm would finish his Vendée Globe without being ranked.

Dominique Wavre did not have any major problems. For a long time, he was up with the front runners, before the newer boats extended their lead. He had a very good race, finishing 7th in his third Vendée Globe and his eighth round the world race, which was a record. The public in Les Sables treated him to yet another amazing welcome home.

Alan Roura taking up the baton

For this eighth edition of the race, Switzerland is represented by Alan Roura who, at 23 years of age, will become the youngest competitor ever to set sail on 6 November. He will be sailing on Bernard Stamm’s former Superbigou. Alan is extremely proud to be the fourth Swiss sailor to take part in the Everest of the Seas. “It’s a huge honour. In Switzerland, the race isn’t as famous as in France, but the Vendée Globe is world renowned and is the Holy Grail of ocean racing for solo sailors. Each time, the public is pleased to see at least one Swiss sailor at the start of such a big race. And there is a lot of media interest,” he explains.

Swiss competitors – the facts and figures