Home News Master of the School of Hard Knocks

Master of the School of Hard Knocks

Triumphant in the summer’s warm up New York – Vendée Transatlantic Race and three times winner of La Solitaire du Figaro, the incredibly competitive solo one design classic stage offshore race which is sailed each summer in 32-foot one design Bénéteau Figaro 2s, Jérémie Beyou on Maître CoQ ranks as one of the favourites to win this eighth edition of the Vendée Globe.

His two previous attempts ended in early abandons. In 2008 his rigging failed on Delta Dore and he retired on the 17th day of racing when approaching the north of Brazil. On the ninth day of the last race he had to turn Maître CoQ round due to keel problems. Despite the successive hard knocks dealt him by the uncompromising, often cruel Vendée Globe, the hard driving skipper from Brittany’s Bay of Morlaix - who grew up sailing with and against the childhood friends that now also rank among his biggest rivals to win this race, Armel Le Cléac’h and Yann Eliès, Beyou remains eternally pragmatic and grounded.

As with others who have yet to beat the Vendée Globe, successive failures have only rendered him harder and smarter. His uncompromising strength and fitness programme is, once again, the talk of the dock. Technically he has striven relentlessly to improve and optimise his Maître CoQ, formerly Le Cléac’h’s Banque Populaire which finished second in the last edition, he and his team making the decision to retro fit foils last winter and relaunching the boat on 16th April this year.

As with most of the skippers Beyou has spent the last few days taking time, relaxing away from the race village, cycling and surfing with his young family. He has never been better prepared for a big ocean race. “I try not to think about luck.” Beyou says, “In the past we were not so well prepared. First time we had not sailed so much with the boat and the mast. And one of the things winning the Figaro and other races tells me more than anything is that you have to prepare absolutely the best you can and you make your luck.” 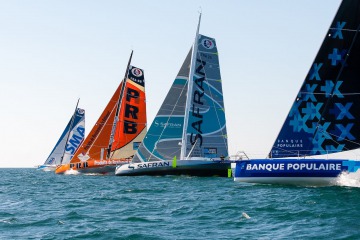 © Christian ChardonAll of the winning skippers of the last four editions of the Vendée Globe have trained with the elite Pole Finistere Course au Large group at Port-la-Forêt, Desjoyeaux (2000 and 2008), Riou (2004) and Gabart (2012). Beyou has been part of the squad there for 20 years since he started in the Figaro and has embraced the collaborative, open processes which constantly raise the level of the group. Nine skippers have worked together within this set up, Roman Attanasio, Beyou, Jean Pierre Dick, Eliès, Sébastien Josse, Morgan Lagraviere, Le Cléac’h, Paul Meilhat and Riou, all sharing the same goal, to win the Vendée Globe. “We are always sailing with the other boats and so you do get to know their relative strengths. We work in turn on every different area, strategy, meteo, medical, through the whole year. And with this group it is an environment which is designed to make it easy to make improvements.”

“When we are working together in a common group it is as open as possible. We start the day with a briefing to discuss common goals, some days will be boat on boat, some offshore, some boat speed, manoeuvres. The coaches work hard to keep it open and the flow of information coming. For example you will report every ten minutes or so on set up and changes. Speed testing you will not discuss sail areas but configurations and what set up you are using. You have to answer but maybe not always people give the right answers. It happens.”

“The differences now, for example since the number of ballast tanks has been reduced, are smaller than before. Generally PRB is still considered to be the fastest all rounder.”

The programme has stepped up significantly since the successes in the last race when Port-la-Forêt programme boats took three of the top four places.
“We have had more specific, specialised experts in more often, meteo guys like Pascal Bidégorry and Jean Luc Nélias, sail designers and specialists always with a full debrief.” 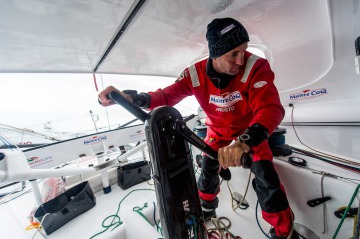 © Olivier Blanchet / DPPI / Maître Coq Béyou will start on Sunday 6th November on the heels of a sound victory in the summer’s New York-Vendée race, a bruising race which proved and acid test for boat and skipper. Since the last Vendée Globe he added his record-equalling third Solitaire du Figaro victory, considering the white hot offshore event an essential component of his solo programme. “The fact is that the chances to race on the IMOCA are infrequent. The Figaro really sharpens you up. It is the only way to get racing as close over prolonged periods.”

His most consistent and equally successful Figaro rival Eliès returns to the Vendée Globe. “I really like Yann and respect him as a competitor. He is very talented. I was reading that he says he does not have the best boat in the fleet but we will see about that. He will be in the match I am sure.” And of his other childhood pal, Le Cléac’h who has twice finished second in successive Vendée Globes? “He is the favourite. He seems very sure of himself. I know him very well. We were very close and used to do everything together but in this world when you are competitors at this level it is inevitable you move apart and have separate lives. This is such a huge challenge but for sure we respect each other.”