Home News Facts and figures about the 2016 Vendée Globe

In five days from now at 1202hrs UTC on Sunday 6th November, 29 skippers will be setting sail from Les Sables d’Olonne for the eighth edition of the Vendée Globe. With more than 680,000 people visiting the Vendée Globe Village since it opened, and with exceptional media arrangements around the world for the start, the Vendée Globe is truly an exceptional global event. The numbers tell the story.

Huge increase in visitor numbers for the Official Village: 380,000 visitors already during the second week
With 300,000 visitors to the site in the first week after it opened, visitor numbers for the Official Village for the 8th Vendée Globe were already very impressive. Then the sun came out and since then, numbers grew to reach 380,000 in the second week. The President of the Vendée Globe, Yves Auvinet had a beaming smile on his face, when he announced these figures, which say a lot about the event. “We had prepared ourselves for crowds at the Official Village, but I must admit that the figures for the first two weeks surprised us, particularly with crowds strolling up and down the pontoons and in the aisles in the Village. The Indian Summer in Vendée since the opening, the high standard of the line-up for this eighth edition and the quality of the events and exhibitions in the Village have clearly attracted a lot of visitors. Once again, the magic of the Vendée Globe is working, as it has done with each edition.”

The media attending the start

22: nationalities represented
31: Stations taking up the live coverage (compared with 18 in 2012-2013) broadcast on the website, Dailymotion, Youtube, and the Vendée Globe facebook page from 0745hrs UTC to 1000hrs UTC and from 1130hrs UTC to 1230hrs UTC.
45: televisions stations attending
80: TV channels involved (compared with 65 channels in 2012-2013), from France, around Europe, North America, Britain, and Asia. Global coverage with teams from CNN, NHK Japan, Swiss national TV and radio, the Belgian station, RTBF… among others.
150: foreign media attending the start
190: number of countries covered
1100: number of accredited journalists 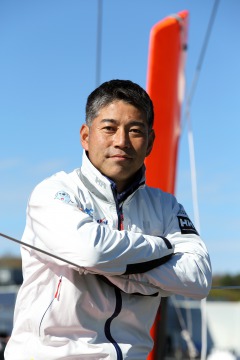 © Yoichi Yabe14: the number of rookies lining up for their first Vendée Globe: Didac Costa, Thomas Ruyant, Alan Roura, Morgan Lagravière, Sébastien Destremau, Conrad Colman, Kojiro Shiraishi, Pieter Heerema, Romain Attanasio, Eric Bellion, Fabrice Amedeo, Enda O’Coineen, Paul Meilhat, Stéphane Le Diraison.
18.28: The length in metres of the 60-foot IMOCA
23: The age of the youngest entrant, the Swiss sailor Alan Roura
43: Difference in age in years between Alan Roura (23) and Rich Wilson (66), the youngest and eldest competitor in the Vendée Globe.
50: The percentage increase in the number of boats in comparison to 2012
78: days, 2 hours and 16 minutes: At the finish of the last race in 2013, François Gabart shattered the Vendée Globe record. The Frenchman improved on the previous reference time set by Michel Desjoyeaux in the 2008-2009 Vendée Globe by six days.
80:  Days. Only two sailors have completed the Vendée Globe in less than 80 days, the legendary time it took Philéas Fogg: François Gabart and Armel Le Cléac’h in 2013.
1998: the year the oldest IMOCAs in the 2016 fleet was built (Romain Attanasio’s Famille Mary-Etamine du Lys) and TechnoFirst-faceOcean (Sébastien Destremau).
24,020: miles, or 40,075 kilometres – the theoretical distance. Remembering that most of the competitors will sail more, sometimes even more than 52,000km to avoid icebergs and areas of high pressure (where there are light winds).