Home News The Adventures Of……..

Many of the current crop of Vendée Globe skippers making final preparations to start Sunday are racers at heart but from almost all of them the refrain is universal.

“I am only looking to finish, to get round the world in one piece.”
“I am not worried about where I finish in the fleet.”
“My objective is only to make a good race.”

The entry of 29 different skippers contains a high proportion of solo skippers who are only seeking to complete a lap of the planet on their IMOCA 60. Skippers like Sébastien Destremau on his vintage 1998 built faceOcean TechnoFirst, Eric Bellion on Comme un Seul Homme, Pieter Hereema on the cutting edge foiler No Way Back, Enda O’Coineen on Kilcullen Voyager – formerly Mike Golding’s Gamesa – and Rich Wilson on Great American 4, previously Dominique Wavre’s Mirabaud and Temenos and Swiss 24 year old Alan Roura on his first circumnavigation on Bernard Stamm’s former self built Superbigou. All are heading out with their main objective being to finish rather than with their finishing position as their main motivation.

Destremau’s dream is no unfulfilled romantic notion carried in his head since his youth. No, the seed of the former grand prix and Olympic classes sailors and commentator’s programme was sewn in a flash four years ago. He was on the pontoon as the skippers prepared, working in a TV-media role and was suddenly swept away by the emotion and desire shared by the skippers. In a momentary lapse of reason he then he pledged to himself to be on the start line for this 2016-17, eighth edition of the race. It has been an incredible battle to get to the start line, putting his finances on the line, crowdfunding to raise money, finding sponsors, preparing the boat and training. 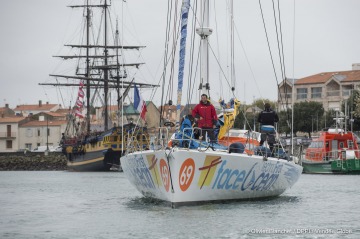 © OLIVIER BLANCHET / DPPI / Vendée GlobeTwo months ago the rig of his boat was broken during a measurement inclining test. Suddenly that meant finding a replacement, paying for it, fitting it and battling the clock to be ready with his boat – the former Gartmore which was sailed the 2008-9 race as Toe in the Water with the enigmatic Steve White.
Even at that Destremau had to be given special dispensation to arrive four days after the published deadline. “I am ready to go. I am not going racing. The Vendée Globe is not a race for me. I want to finish, no matter how, no matter when, I want to finish. That is all that matters.” Said Destremau today, “I have been the race directors when I want the rankings. I said ‘none’.I don’t want to be racing. I don’t want my judgement to be influenced by my competitive spirit. I have been a competitor all my life. I know the dangers of letting your competitive instinct override your instinct and so this time it is not going to change for me. Maybe in two or three weeks that will change and I will want to know. But I was influenced during the qualifier from Lanzarote to Newport and I nearly paid the price. I made a bad judgement I could have lost the project because, like an idiot I went straight through a storm because I thought I could win. I won’t do that at any price.”

Destremau explains: “The Vendée Globe started four years ago. Doing the Vendée Globe? Four years ago to the day, Saturday night, I was on the dock, it was raining, it was horrible, it was miserable. But the ambience, the emotion got to me, knowing that the following day 20 guys were going out to do the Vendée Globe, I wanted to do.”

“It has been a complete nightmare in every way to get here. The stress levels every day have been extraordinary. But it has been exhilarating. The difficulty, the million decisions to be made, the problems to be solved, but the joy to see the project moving forwards little by little, from the ground up, to be here now, is just extraordinary. It has been brick by brick, even with the mast being broken, seven weeks ago, to manage to be here is incredible. I feel so, so proud of the team that has got me here. It is just incredible.”  Destremau says. “I’ll take some credit when I finish, but it is down to them I am here. The rig I now have 100 per cent confidence in. It sailed upwind in 40kts for three days getting here with no problems. It is tested. I have new sails which are good. I am very confident in the boat. I am not so confident in the electrics, we lack a bit of work there. I have been sailing all my life but I had to learn more about myself. My background is America’s Cup stuff. My question is how will I cope after 20 or 30 days. The most I have had before is 12 days, crewed. I have had to learn to sail alone. I did 43 days with two of us bringing the boat back from South Africa and the Transat 16 days.”

At the other end of the IMOCA performance spectrum Dutch businessman Pieter Heerema shares the same ‘finish the race’ philosophy. He has a cutting edge VPLP-Verdier design which is visibly envied by all the young Turks sharing the same dream of Vendée Globe podium, this time for some of the top rookies this time, or in the future. “In the Vendée Globe I am not really that much of a competitor. For me this is an adventure, a chance to complete a circle around the world, and what I am on the finish does not keep me awake at all.” Says Heerema, “ But on the other hand I like speed, I like action, I like technology. That is what has driven me to a boat like this and to prepare my new foils, the set up of the sails which I have worked on with our sailmakers and designers. It is not intended to be a slow trip. But where I cross the finish line does not concern me at the moment. That is totally different from my ‘normal’ sailing when I am considered my many to be ultra competitive. I like sailing but when I race I want to do really really well.” 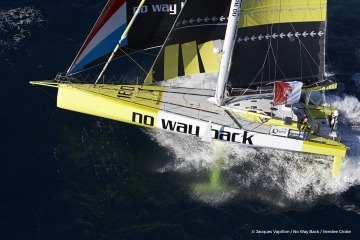 He bought the foiling IMOCA just over one year ago when the financiers of Andrea Mura’s programme withdrew. Built at leading raceboat specialists Persico in Italy, Heerema revealed he has already four offers to buy his boat after the finish. He is a vastly experienced yachtsman who has raced and cruised all around the world, but this is about getting his IMOCA round the world: “ I think the worst thing for me would be to round Finisterre in third or fourth place! In my racing sailing. I have sailed in Dragon fleets of 80 or 90 boats in a two boat programme with the famous coach Rod Davis. And he would say ‘If I see either of you in the top 10 at the first mark you will get punished.’ But by that he meant don’t go off too hot. And it is definitely the case for me here. If you go too hot into it then you can do wrong things. So I should not be in the first group early on or the  old racing mentality will kick in and so I just have to be consistent and make nice average speeds.”

And Ireland’s Enda O’Coineen is looking to realise his ambition to complete the ultimate circle. He has Mike Golding’s Owen Clarke former Gamesa on which he finished third in last winter’s heinous Transatlantic from Saint Barths to Saint Malo.
“Look that result was a real surprise to me.” O’Coineen said today on this return to the Race Village from his native Ireland. The inside and outside of his boat is plastered with images of home and his family, and poetic epithets to motivate him. 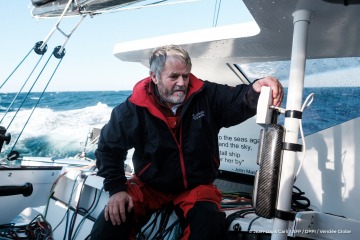 “I feel lucky I have a good boat and it is in good shape. This is a personal adventure. I need a challenge, a personal odyssey. I have always admired the race. I was nervous last year but found I can do it during that race last year. So much of it is the confidence to do.” O’Coineen said,
“It is such a pure adventure. I am really pleased to be able to take part in this dream race with a boat representing Ireland. We are not trying to reinvent the wheel. Our main goal is to sail the boat safely around the world in this huge adventure. It stimulates your brain and takes you into such a different adventure. It is my answer to meditation, to yoga, a mental escape, a human journey. ”

But veteran Hungarian Nando Fa, 63, assert he is a racing, performance driven skipper who is looking forwards to pushing his boat and getting a result which he can be proud of.
“I will be pushing the boat all the time to the highest level that is reasonable for me. It will not be the level of the youngsters because I have had too many negative experiences, I know what can happen. I want to race. I don’t to want to think that there is a seniors’ race, an extra seniors race. I am a competitor in the Vendée Globe. My boat and I are racing and I want to finish somewhere in the middle. I want to be there. I know who should be in front of me.”

The first time ever