Home News It's a family affair

On Sunday, 29 skippers will be setting sail to spend three months at sea, leaving behind their nearest and dearest, who have to cope alone with their daily life ashore. When you live with Jean Le Cam (Finistère Mer Vent), Kito de Pavant (Bastide-Otio), Louis Burton (Bureau Vallée) or Alan Roura (La Fabrique) the Vendée Globe is also part of your life. How easy is it for them to understand their partners?

Louis Burton and Servane Escoffier do not separate their private and professional lives. They are experiencing this Vendée Globe as a couple together, but they have ensured that their children only get positive messages, allowing them to talk when things are going well at sea. Servane is confident. “I know that Louis is a very cautious sailor and will look after himself and the boat. For our children he is a hero, so they like to get all the news. If anything goes wrong, the kids come out of school so they don’t hear the news there.”

Françoise, who lives with Kito de Pavant, helps with his logistics. Naturally optimistic, she tries to reassure him. “I don’t let my apprehension show, as I don’t want to pass that onto the family, but the start of the Vendée Globe is the most emotional moment I know.”  As for Kito, he seems to believe everyone is relaxed. “The family is used to seeing me go. For my kids, it is the parents who don’t sail away, who are odd! I try to call them up, when things are going well to stop them from worrying.” 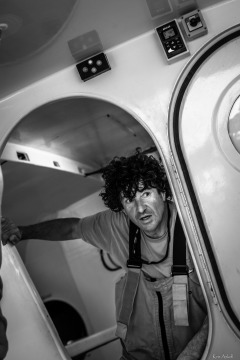 © labandealecamAnne and Jean Le Cam are innovating in terms of their relationship. “This is the first time I have worked on Jean’s project,” explained Anne, who after the crowdfunding campaign, is now taking care of communications. ”In the past, I had no link with how this was organised or how the boat was doing. Jean used to call me when he wanted. That could be every day, but sometimes never, depending on his mood. For this Vendée Globe, we are going to have to fix times for calls, but we’ll be keeping it simple and natural and free.”

Alan Roura and Aurélia Mouraud, his press attaché work and live together. It can be hard separating the two aspects. “This week at the restaurant, we didn’t want to talk about the boat for a whole evening, but we didn’t manage it. We’ve been living this project together for eleven months.” Alan believes it is easier to communicate when he is at sea. “At sea, we talk to each other like any other couple, then switch into work mode to talk things over.”

Vincent Riou’s family life is built around his life as a sailor.  “For us, it’s normal that I set off to race in events like the Vendée Globe, so it’s not that much of a shock. But the family has its own life and can’t be taken over by my race. We do what we can to protect our two children, who are 8 and 13. We fall out with teachers, who want to deal with that in their classes. Before setting off, I have enough pressure with the boat, media, partners, so I don’t want to add to that. I want to keep my family out of that to avoid getting affected psychologically.”

Yann Eliès is not too worried about his two teenagers, who are used to their father being absent. “They have their own lives as teenagers, but I have a 5 year old, who finds it harder to understand the concept of time. She asked me, how long three months was going to be. The comparison is the 45 days I spent with Uncle Yann and Jacques (Guichard, Jules Verne Trophy on Sprindrift) last year. We asked the teacher to avoid talking too much about it to avoid it becoming a worry for her. I’ll try to call her before or after school, but once at sea I tend to get the times and dates mixed up.” 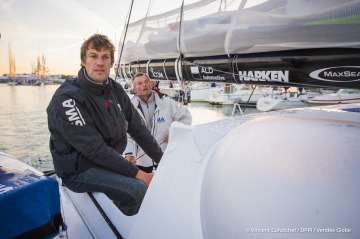 “I was already a sailor, when I had my family,” said Paul Meilhat. “Since then, I have done 7 transatlantic races so a month or so several times, meaning it is part of our life. It’s going to be hard for three months, but we’re preparing for it. I’ll call them up once or twice a week, but prefer to send e-mails and focus on the race.”

Since he registered, Stéphane le Diraison and his wife, Bénédicte have been preparing their two daughters. “I explain to them that it is something positive and that to see a dream come true, you have to be fully committed. We spent 5 days and nights on the boat between Lisbon and Barcelona in December and celebrated the New Year aboard. Those memories help us come to terms with this separation. During the Vendée Globe, I’ll call them each day to stay in contact.” On Hugo Boss, Alex Thomson has promised to call his wife each day. “We’re going to have more time to talk than I have had this week. She has promised to send me little recorded messages from the kids.” 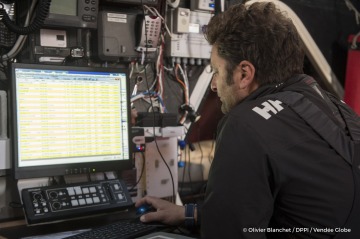 Arnaud Boissières doesn’t like phoning home, when he is at sea. For his third Vendée Globe he will be leaving his Léo, born just a few weeks ago. His wife, Julia knows that the phone can add to his stress. ”We’ll send an e-mail to set up a time via Skype, so that he can see his son. I know that Arnaud is cautious, but that will be an extra incentive.” Thomas Ruyant doesn’t like setting up timetables for phonecalls either. ”I’ll call when I feel like it. I don’t want everyone hanging around wondering why I haven’t called on time.”