Home News The gaps are widening

For the seven frontrunners, the Doldrums are in their wake. Alex Thomson is out in front and set to smash the reference time to the Equator, but further back, there are races within the race. They still have the Doldrums to deal with and the fleet is likely to stretch out over the coming days.

Jean Le Cam (Finistère Mer Vent): "We’re in the Doldrums with light and variable winds, requiring a lot of work. We don’t have any squalls and are making around five knots for the moment under mainsail and J1. I may hoist the gennaker. There are lots of sail changes. This is an exceptional Vendée Globe with practically no damage. The fleet is spread right out, but we knew that would happen before the start. Hugo Boss is set to smash my reference time to the Equator set back in 2004. It was about time somebody did. I don’t know when we’ll get out of here. The simulations are useless in this area. It’s really light and the gap is going to widen. Those out in front will get away from us. Hugo Boss is impressive, making it through the Doldrums without even seeing them. I’m keeping a close eye on those around me in this race within the race. I’ve been with Thomas (Ruyant) for a while now…" 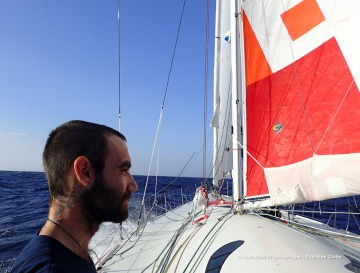 Alan Roura (La Fabrique): "I’m sailing my boat as best I can and we’re approaching the Doldrums in 7 or 8 knots of wind from astern. We know there will be two or three tricky days after the Cape Verdes, but after that it will be fine. I’m enjoying myself, as we have had great conditions since the start. I’m here in my old boat and just ahead there are three other boats, so we’re having our own little battle. I’m trying to regain some ground from Romain Attanasio, Kojiro and Rich Wilson, who are all great sailors." 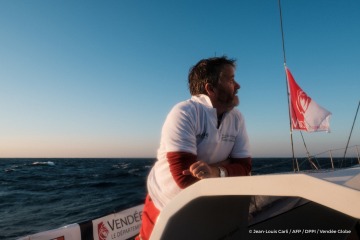 Enda O Coineen (Kilcullen Voyager Team Ireland): “Upfront Alex Thomson seems to be pulling clear, I would love him to win. Back here, we're happily moving along on a more leisurely fashion. I think my detour around the Canaries did not help - together with sail problems.  Also being away from the fleet, one possible explanation is tha I have been sailing at slightly wider angles. The next big decision is to whether to take a course straight through the Islands (Cape Verde) or gybe and go more west where the wind angles and breeze could be a bit better  - though since  I will hit the island durning the day, the scenic route may be more interesting.” 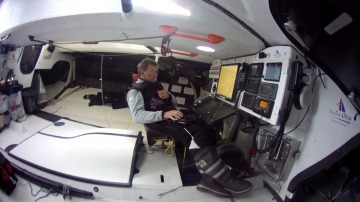 Kito de Pavant (Bastide Otio): “The Doldrums are starting early. The wind suddenly dropped at 10°N in a squall, which was a foretaste of the difficult day ahead aboard Bastide Otio. I had planned to get some sleep during the night before reaching this area, but the opposite happened...
What wind there is is unstable and thunderstorms are threatening off to the west. This means lots of manoeuvres, even if I’m trying to keep them to a minimum.”

Didac: Being alone is a bit of a shock