Home News The fleet stretching out because of the Doldrums

The fleet stretching out because of the Doldrums

With Alex Thomson still leading the way, the frontruners are expected to cross the Equator this evening. Romain Attanasio is meanwhile passing the Cape Verde Islands. Here is what Alex and Romain told us earlier today.

Alex Thomson (GBR) Hugo Boss: "It was a steady night, not too much change in the wind. It was a little gusty at times. It was generally pretty stable and so I was able to get some rest which was good because I badly needed it. The boat seems good and it seems like we will soon be into some stronger winds, it will free us up and we will start to go pretty fast I think. The routing I am seeing down to the Cape of Good Hope is quite quick. We are getting pretty close to the Cape in 10 days time. So that is very positive. I think this foil is good in the light, no problem. I think our weakness is against conventional boards upwind, whether it is light, medium or maybe in the very strong stuff. At the moment we are in quite similar breeze. The GRIB files show they should be a little more lifted, they might have a better angle. I think by the time I get to the Equator I see the wind filling in for me first and so it should be pretty good.“ 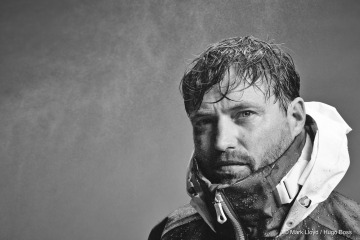 © Mark Lloyd / HUGO BOSS“I feel pretty confident when this boat is going fast. We had a little snippet of what this boat can do in the New York-Vendee and then since then I have said before we have made leaps and bounds performance wise. But even so I think we are still very underdeveloped compared with a lot of these boats. I think when we start reaching, start foiling, our foils work extremely well. That is the reason we had a bit of pace at times on the trip down the Atlantic was because our foil works in the VMG mode, with very, very low angles of heel. 5 Degrees of heel and I can see sometimes ten tonnes on the foil.  So that is really helping in a wide range. Our foil itself, the working area, is more than double that of the Dali. That plan gives you a positive effect earlier.”

“I keep up to date. I am fully aware of the president elect in America, that will be interesting, I saw Lewis Hamilton had won in Brazil which is great, and Andy Murray won his first match yesterday. I don’t get much time but when I’m in front of the computer to do stuff, I can sit with the mainsheet in my hand and trim and catching up some of the day’s stories, that keeps me entertained.” 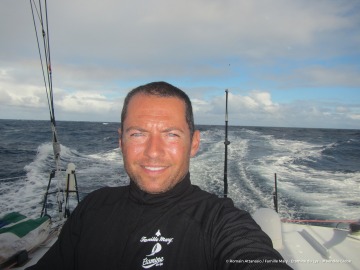 Romain Attanasio, Famille Mary-Etamine du Lys: “The Doldrums are complicated, but I can’t wait to get there. I have divided the race up into stages, otherwise it is mindblowing. The first hurdle is the Doldrums. I can’t wait to get across and complete this first aprt of the race. It was Catherine Chabaud who advised me to think in stages like that. After there is the Equator, the Cape of Good Hope, the Indian and then it’s by ocean. It’s often said that the Vendée Globe is one problem after another. Off Madeira I fell into the trap of the wind shadow. The Japanese guy is just in front of me, so he’s my pacemaker.”