Icebergs straight ahead, Saturday,  December 29th, 2012, 05H10 PM, 6th edition of the Vendée Globe : “Armel le Cléac’h and François Gabart (2012-2013 Vendée Globe winner) just crossed the last safety ice gate, the East Pacific gate. They should arrive at Cape Horn in three days, but the road will be difficult. They must slalom between 15 icebergs, detected by CLS, drifting to the South-East of Cape Horn." To detect icebergs and predict their drift, CLS developed a solution to detect potential icebergs that have broken off of Antarctic glaciers.”

Satellites are the only way to monitor large and dangerous areas around the Austral ocean. Moreover, radar satellites provide relevant images despite cloud-cover or night. For ice detection, engineers form CLS use altimetry satellites like Saral or Jason-3, developed by CNES, as well as  radar images from  RADARSAT-2 satellite developed by the Canadian spatial Agency and Sentinel-1 from the European Spatial Agency ESA. 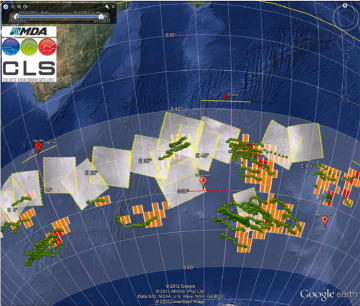 The Vendée Globe a race under high satellite surveillance.