The lead has changed again between the two frontrunners in the eighth Vendée Globe. Faster in the 0400 rankings sailing at 18 knots, while Alex Thomson was averaging 16 knots, Armel Le Cléac’h carried out fewer gybes with the result that Banque Populaire VIII has regained the lead This is the fifth change in leader since 26th November between the two skippers.

Banque Populaire VIII has an advantage of 4.5 miles over Hugo Boss in the 1100 UTC rankings. The wind is set to strengthen and the two IMOCAs will be ahead of a front in a stronger NW’ly air stream (25-30 knots), meaning they will be on the port tack, which is less favourable for the British sailor since he damaged his starboard foil. The duel is set to continue as they make their way towards the longitude of Cape Leeuwin, which they are expected to cross tomorrow evening.

Armel Le Cléac’h (Banque Populaire VIII): “We have between 15 and 20 knots if wind from the NW. It’s not as cold as in the Kerguelens, even if it’s still pretty cold. It’s nice to have two or three degrees more. I must have done 7 or 8 gybes and it was quite tough. We’re going along the edge of the exclusion zone and the wind keeps changing direction.

It’s my son’s birthday today. He is six and I wanted to give him a nice present. I told him I would be in the lead for his birthday, so I had to put my foot down to catch up. I spoke to my son and he was getting ready for a party this afternoon. It was the same four years ago. He was two then and I was off the Cape of Good Hope. This time I’m closer to Cape Leeuwin, which we should reach on Monday morning. 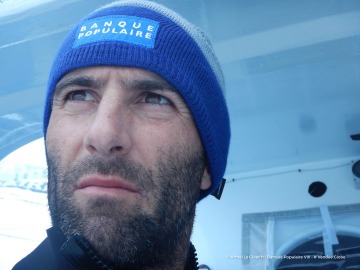 There are some similarities with the duel from 4 years ago, as we keep changing over at the front, but we don’t have many weather options and the corridor is fairly narrow between the Ice Zone and the front to the north. We saw each other jus now. Four years ago, we saw each other too, but with François it was later in the Pacific, even if we were never far apart. We’ve been sailing for a month, so it’s great to be at the front.”