SMA, Maître CoQ and Quéguiner Leucémie Espoir have to deal with a low pressure system, while the leaders are still sailing fast towards Cape Leeuwin. 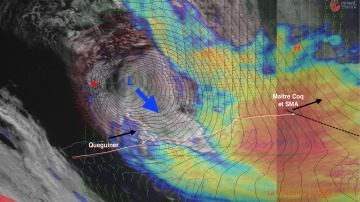 © Great CircleWeather conditions sometimes force the competitors to slow down. That is the case on Saturday, December 3rd in the Indian Ocean for three of the competitors, Paul Meilhat, Jérémie Beyou and Yann Eliès, who have to deal with a very deep low pressure system which is moving across their route. The depression marked by "L" on both charts is coming down from the South of Madagascar and moving at more than 30 knots towards the South east of the Kerguelen Islands.

SMA and Maître CoQ opted for a Northern option which allowed them to sail South of the depression and to position themselves in its East. Thus the low is going to pass behind them. The satellite picture shows a very active system with probably a lot of rain around their location.

Yann Eliès did not have time to pass in front of the depression. Not to risk to getting trapped in its center, so he decided to slow down. He was clocked this morning at 7 knots. 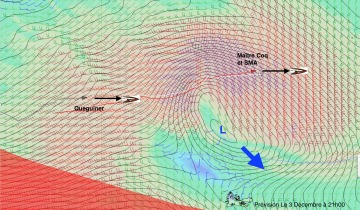 © Great CircleHe is therefore allowing the low to pass in front of him. He will accelerate in the afternoon while the depression will continue on its way towards the Southeast. He will round it via the North in less strong winds (35/40 knots all the same, that is 70-75km/hour), but which are nevertheless unstable with probably a lot of squalls, rain and strong gusts.

Meanwhile, Banque Populaire and Hugo Boss are pursuing their route in front of a small front which should allow them to reach Cape Leeuwin in record time. In the Atlantic Ocean, a new low is going to sweep across part of the fleet during the afternoon.