Kojiro Shiraishi informed everyone at 0230 UTC today (Sunday) that his mast had broken above the attachment for the small jib.The Japanese sailor is not in danger and is busy trying to set up a jury rig. Kojiro is fine and in contact with his shore team to judge the extent of the damage and to determine whether it is possible to continue the race. He is safely heading for Cape Town.

Kojiro Shiraishi informed us late yesterday that the wind had increased a notch (35-40 knots) and that he had switched to J-3 (small jib) with three reefs in the mainsail. In the middle of the night the spar broke above the second layer of spreaders. The skipper is fine: he is remaining in contact with his shore team to judge the extent of the damage and identify whether it is possible to continue the race aboard Spirit of Yukoh. He is no danger and is heading for Cape Town.

The powerful winds which are blowing across practically the whole of the Southern Ocean have led to several incidents with case of damage reported. Jérémie Beyou (Maître CoQ) had to lower his mainsail in the night following a problem with his mainsail car: he is heading towards the NE towards Amsterdam Island in the middle of the Indian Ocean to see what can be done in calmer conditions. Arnaud Boissières (Le Mie Câline) also had the same problem during the night 350 miles SW of South Africa in winds that were not that exceptional (25-30 knots) but with heavy seas.

Nandor Fa has encountered some electrical problems aboard Spirit of Hungary. His autopilot failed twice and yesterday he lost his gennaker. Almost at the same time, Conrad Colman was facing a similar problem. His autopilot turned off due to an electrical malfunction, which drove the boat into a situation where he almost lost one of his sails.Finally in Cape Town, Vincent Riou (PRB) set off again in the middle of the morning on Saturday from South Africa with part of his shore team to head for Brittany.

Arnaud Boissières (La Mie Câline): “I’m getting ready to carry out repairs. In the night my mainsail car broke away from the mast. I am waiting for the wind and especially the sea to calm down to do something about it. The sun is coming up here and I need to get the sail down to change the car… The wind has been very irregular since yesterday evening when the front went over: There isn’t that much wind (25 knots), but the seas are very nasty. I have to find the time today. I’m going to have to slow down… I have a spare part (a brand new car) but I hope the mast track hasn’t been damaged. In fact, I carried out three gybes yesterday and the last one was a little more violent, but I didn’t hear any noise. It was when I looked at the mainsail with two reefs in and the small jib that I noticed that there was a problem. I was surprised by the sea state, as it is very heavy and cross.” 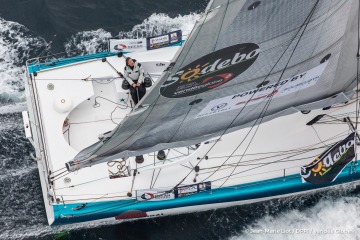 Conrad Colman (Foresight Natural Energy): "An electric bypass destroyed one of the solar charge controllers and it damaged the electric cables next to it. It stopped the electronics and thus the pilot, and I lost control of the boat as I wasn't at the helm. By the time I got there the boat was on its side and the gennaker in the water. It took me a lot of time to regain control and then to try to save the sail.” 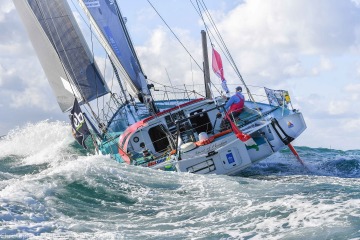 © C_Favreau / Spirit of HungaryNandor Fa (Spirit of Hungary): “I had a very eventful night. After my autopilot turned off by itself for the second time, my boat gybed with the mainsail and the A7 gennaker. I stopped the boat to repair the autopilot. The cable was so corroded I couldn’t even unplug, I had to cut it. I cleaned the cables, and reconnected them. Everything went all right until the morning. I just went outside when the wind increased. An enormous wave and a big gust came at the same time. Then I heard a loud crack and the A7 sail was broken in half with one quick motion. I had no other choice, I had to cut it off and let it go. Unfortunately it took one of the halyards too, I couldn’t save it.”