Early in the 16th Century, the Portuguese sailor Vasco de Gama opened up the route to Calicut, a trading crossroads for the Indies and surrounding regions (Sri Lanka, Malaysia, Moluccas) where there were many Arab dhows. The more or less punitive expeditions by the Portuguese were aimed at taking over these markets in 1500: Pedro Alvares Cabral, Joáo de Nova, Vasco de Gama, Alfonso d’Albuquerque, Francesco d’Almeida, Tristáo da Cunha… all sailed along this route along the coast of Africa.

But the French, English and Dutch wanted to find another way to transport spices and riches from Asia getting around the powerful Republic of Venice, which governed the shipping movements in the Mediterranean. The rich merchants from Amsterdam fitted out four ships led by Cornelis de Houtman, which after a lot of adventures landed in Banten on 27th June 1596: even if the expedition was a fiasco, it led to the creation of the Dutch East Indies Company in 1602, by which time the Dutch had sent out 65 ships and reached Japan and China. It was the equivalent of the British East Indies Company created two years earlier. Firstly based in Djakarta, the Dutch company developed under the leadership of the governor general Jan Pieterszoon Coen, who signed a treaty with the English, invaded the Banda Islands and then removed the Portuguese from Malacca

While merchant ships sailed to India and the eastern Islands all the way to China, the lands further south remained unknown. in 1605, the captain of the Duyfken was sent to find out more about New Guinea and sailed down to cape York in the north of Australia. Willem Janszoon was the first European to step ashore on the fifth continent. No one really knew much about these lands, which appeared to be part of Terra Australis… With more and more ships going to India, the Dutch caught sight of the west coast of Australia, as the boats sailed due east after the Cape of Good Hope to aim for the Sunda Strait at 70° E. Several men were lost in the storms in the Indian Ocean.

Western Australia was discovered by chance by Dirk Hartog on 25th October 1616: the Dutch landed in Shark Bay at 25°30’ S and 113°30’E. Before returning home, they nailed a pewter plate to a post, which was found 81 years later… Frans Thijssen, captain of the Gulden Zeepaerdt explored the SW in January 1627 and named it Nuyts land. Two years later, the three masted vessel, Batavia ran aground on 3rd June on Abrolhos de Houtman island. The shipwreck led to a mutiny led by Jeronimus Cornelisz, with murders and drownings leading to the disappearance of a third of the crew and passengers (320 set sail from Texel).

Dutch sailors sailed around all the Eastern seas around Sumatra, Cambodia, Japan and China, and the new governor general of the Dutch East Indies Company aimed to strengthen the power of the colony and develop trade. Antonio van Diemen decided to send Abel Tasman out to discover the Indian Ocean to the south of the trading route to find out whether there was a route to Chile…

After reaching Rodrigues Island and Mauritius, the Dutch seailed to the SE and reached the latitude of 47°24’S before discovering some new land where Francoys Jacobszoon stepped ashore on 2nd December. A fortnight later, the Dutch sailor discovered New Zealand, which he called Statenland.

Very few sailors ventured into this area with its howling winds and rocky coastline with the heavy Indian Ocean swell. Marion-Dufresne in March 1772, Tobias Furneaux and Bruny d’Entrecasteaux in 1773, James Cook in 1777, George Bass and Matthew Flinders in 1798… But it was only in 1803 that a colony was established on this island in Risdon Cove in the Derwent River estuary to stop the French led by Nicolas Baudin in 1802 from claiming this virgin land… 5000 aborigines would be massacred by the prisoners and their British guards or by illness with the final representative dying in the early twentieth Century.

A trapezium shaped island measuring 365 km by 305 km, the main island and the thousand of surrounding islands stretch out over 68,000 km2 bringing together more than 500,000 inhabitants, chiefly concentrated in the major cities of Hobart, Clarence and Glenorchy around the Derwent, on the West coast in Launceston, in the NW in Devonport and Burnie. Territory which was for a long time protected, Tasmania was named Inspiration Island with its natural parks cover a third of its surface and is a UNESCO heritage site. Several natural species have died such as the Tasmanian wolf or were just saved in time like the Tasmanian devil, the wombat, the duck-billed platypus, the Tasmanian echidna, species of bird and frogs. There is a wide range of plant life, some of which can only be found on this island.

The line separating the Indian and Pacific

While cricket and football remain the most popular sports, sailing comes alive here after Christmas with the famous Sydney-Hobart Race, which has begun on Boxing Day since 1945 with the finish along the basalt cliffs of the Derwent, several miles from the capital, Hobart.

The SE tip of Tasmania determines the longitude (146°49’E) separating the Indian and Pacific oceans. The World Sailing Speed Record Council (WSSRC) recognises the Indian crossing record (between Cape Agulhas and South East Cape), which has been held in the solo IMOCA category by Mike Golding since 2004: 14 days 21 hrs 1 minute… A reference time that Armel Le Cléac’h and Alex Thomson look like smashing. 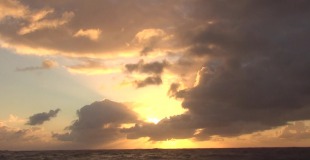