With gaps that never have been so narrow, the Virtual Vendée Globe Top 10 is about to cross the Cape Leeuwin’s longitude in a few hours. The cape is located at the southwest tip of the Australian continent. Leszek2011, long time leader of the race, just gave up his rank to Margael; but the positioning of the late, more in the North, should not enable him to keep the first spot very long, specially because the distances between the three leaders are less than 0,1 NM. After 30 days of race, the pressure is tangible and no one seems to be able to take a definite advantage at the moment. This affrontement promises great brawls for the next days of race.

“What’s good in virtual sailing is that one can go into places where he would never go in real life”. 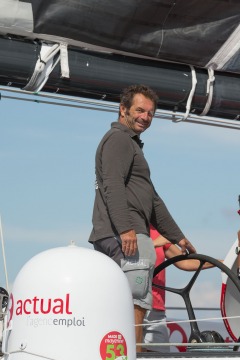 During his multihull winter upkeep, talented sailor and skipper of the Maxi trimaran Actual Ultim, Yves Le Blevec (yves624) competes in the Vendée Globe virtual world. Between two programmings and a visit to the Paris boat show, Yves has accepted to answer our questions:

« I usually don’t play on sailing simulations, but I would have not missed the start of this Virtual Vendée Globe; I’m quite a constant player on it. I have chosen Didac Costa’s boat because she was the first to get out the harbour in les Sables d’Olonne. The new interface is really ideal and it quickly catches you. It’s very interesting and close to reality as far as the weather transitions are concerned. In contrast, I’m happy to be behind my computer screen as I’ve just crossed a rather active front where I got 40 kts of wind during 24 hours. In the real life, I would never have been there.

That’s what is good with the virtual game: you can do a bit as you want and go where you want. In the real sailor’s life, we have to balance a lot between the weather and the risks involved. Here there is no breakage, no weariness… I have been lucky enough to sail under these latitudes during the Jules Verne Trophy and this is really the same atmosphere as on the pictures that we have seen thanks to the French navy. I’m currently sailing in the East of the Kerguelen Islands and my northern option has paid off. I’m 1943rd and I’ll have to manoeuver quite a lot because I’m at the ice limit. I went once under it and I don’t feel like doing it again.

I mainly log in from my tablet because the connection is faster, but on my computer I have some navigational tools and that still helps me quite a bit. I take stock about every 12 hours and the programming helps me a lot in my route. It’s an essential tool, otherwise you’ll have to spend rally a lot of time on it. We talk a little about the race with my mates in the bar of la Trinité. It’s really a nice atmosphere around this game.

Apart from that, in my real sailor’s life, my boat Actual Ultim is currently undergoing winter maintenance in la Trinité sur Mer. We’re making big changes with a new mast and a new rigging; and that of course gives a lot of work on the deck plan to harmonise everything. The season’s program for Actual will focus on the Bridge 2017, which is a great race for the Ultim’s and the QE II between Saint-Nazaire and New-York.»

What happens when crossing the arctic exclusion zone?

Morning VR, You seem to be sailing under me this morning! LET BATTLE COMMENCE

What happens with the ranking of the boat Mercurio, who is 20000 miles far away?

Great race, still waiting for the great sailor Bergamot TR to catch us up, Don't give up Bergamot Tr! Race is long!

Almost passing THE cape, lots of wind and greetings from Holland to mister Heerema.

Yes!!! Finally made it into Indian Ocean Now rapidly rising up the rankings First time VR player but really enjoying it Thanks VR team!

260,000 of you are currently sailing in the Indian Ocean and are benefiting of the beautiful depressions sweeping the area. These rather strong winds contrast with the South Atlantic Ocean of last week and the long hours of dead calms in St Helena. Enjoy the long surfs and go have a look on your virtual boat on the 3D Viewer. This is a total immersion with an amazing realism. The race leading pack is now in a transition phase and will be soon caught again by a new low. The conditions on zone give a SSW’ly 19 kts wind.

Thanks to you all for your messages.

Embark for the virtual race around the world! Join us at: Virtual Regatta.