Conrad Colman, currently in twelfth place directly south of Madagascar, has shown in this race that he is not merely able to deal with the technical problems thrown at him, but he has also revealed his ability to communicate how he feels and what life is like aboard an IMOCA with all its ups and downs. Here is his reaction to the recent incidents in the race.

Without sounding too morbid, I feel a little like I'm sitting on death row and my fellow competitors have already been taken to have their last meal. It’s emotional and shocking to hear about Kito's rescue and to think that for the third time in a row he won't make it back to Les Sables under his own steam. With such great teams as Gitana and PRB also falling to misfortune it’s just the proof that the ocean doesn't look at your bank balance or the size of your team when dealing out the hard cards.

Mich Desj’, two time winner of the Vendee Globe, says that you need to be mentally prepared for one major problem per day and so far I'm keeping up with his tempo. I am still working to get the battery pack online after the fire and whenever I look around there's a new error message displayed on the instruments. It appears that I'm still losing a little oil from the hydraulic ram I repaired in the doldrums and I just got back on deck after over an hour up the mast to repair a sail.

When the wind shifted this afternoon from NW to N, I changed from my bigger reaching sail to my smaller flatter sail, the Solent or J2 which means its the second biggest jib on the boat. When I unrolled it I saw that the pocket that holds the sail onto the cable was damaged and the sail risked to unzip itself completely. As the front of the sail is only exposed when the sail is unrolled I would have to fix it when the sail was working and the boat was fully powered up because I couldn't bear away onto a run because the Ice exclusion zone itsn't far to leeward. 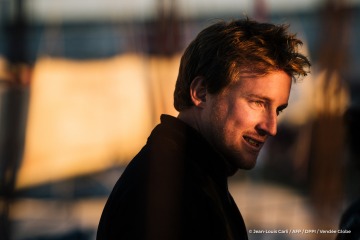 So, with the wind blowing at 20 knots and boat speed sometimes the same, I climbed almost to the top of the mast and then hand stitched the pocket closed and then covered the repair with self adhesive sail cloth. Because I had a lot of stitching to do I did it i several sections, which of course meant I had to cut new lengths of string and re-thread the needle. 22 Metres in the air, one foot hooked around the sail and the other around the mast, bracing to stay stable and then concentrating on the needle I figured the closest possible comparison would be threading a needle on the back of a galloping horse while doing the splits and situps at the same time. I guess you need to have a head for heights!

By living with a tool kit and multimeter in my hands as much as the helm and the sheets I just hope that I can resolve enough of the problems fast enough to keep me in the race and avoid the fall of the executioner's axe!

The Pacific and half way for the leaders

Two is better than one

Leaders knocking at the door to the Pacific, repair mode for others