Another world... analysis and reactions

The disturbed weather system off New Zealand is dropping down so quickly towards the Antarctic that Armel Le Cléac’h has had to rejig his gameplan. He’s now set to pass to the North of this low pressure centre and will lose the bulk of his lead over Alex Thomson. For a second time, the two leaders are set to endure 36 lively hours, whilst their pursuers will have a calmer transition into the Pacific… However, a new, meaty and pacey system is flexing its muscles and seems to have its sights on Yann Éliès and Jean-Pierre Dick…

For Armel Le Cléac’h (Banque Popualire VIII) and Alex Thomson (Hugo Boss), the 5,000 miles of water, ice and all-pervading solitude that make up the Pacific Ocean feel all too real right now. Is it any wonder then that Armel Le Cléac’h is reassured to have Alex Thomson alongside him and doubtless vice versa as they negotiate this corridor of mist, cold, breeze, uncertainty and isolation and far beyond, at the end of this dark tunnel, the deliverance that is Cape Horn.

In the meantime, the low pressure system rolling down from New Zealand has ultimately managed to outsprint the leader, who will no longer be able to slip ahead of it and steal a march on the Briton. As a result, Armel Le Cléac’h put in a gybe this Sunday morning to get around to the north of the obstacle created by the eye of this system, giving Alex Thomson the chance to cross his trajectory and reduce some of his deficit.

A much reduced delta

From tonight, GMT, the duo will be drawn back together again as they tackle a muscly south-westerly breeze blowing off the back of this disturbed system and producing 35-40 knots of gusty conditions and breaking seas. Foils will clearly have no place on this bumpy road in the middle of nowhere on the far side now of the international dateline. In the immediate future, 36 hours of seriously tough, stormy conditions will be coloured by an all-encompassing greyness and by doubt.

And on this Sunday, where the days are the same but different (two 11 Decembers for the two leaders), the situation isn’t likely to calm down until Tuesday, caught up by one of the tentacles of a zone of high pressure. Yet this haven will be short-lived as a new, angry depression is heading their way, first scooping up a worried Jean-Pierre Dick off New Zealand as it trucks across the Furious Fifties! Though Paul Meilhat (SMA) and Jérémie Beyou (Maître CoQ) will only have to deal with a slightly angry foretaste of this system, it is likely to be seriously riled by the time it hits the skipper of StMichel-Virbac, who has closed to within a hundred miles or so of Yann Éliès (Quéguiner-Leucémie Espoir), at which point he will be right in the middle of the 400-mile corridor between the ‘ice wall’ at 54°S and Stewart Island, to the South of New Zealand. As was the case during the tropical depression that prompted Éliès to ease off the pace and change his heading at the heart of the Indian, this weather system needs to be studied in detail before the skippers sign up for the ride: verdict on Monday evening.

Riding the low pressure waves in fits and starts

However, this big bruiser of a weather system is but a locomotive ahead of a whole train of depressions stirring up the Indian Ocean. Indeed, as part of a vast, whirling system, oscillating its way through Argentina and Chile via the southern islands, the wind is set to blow and blow. As such, whilst the two leaders zigzag around the centre, their pursuers will be pushed and jostled around by the incessant NW’ly wind, backing round to the SW, a tempo that will be repeated endlessly like a metronome, the sailors switching from moderato to fortissimo according to the rhythm of their progress. Dancing to its tune, Jean Le Cam (Finistère Mer Vent) has temporarily bid farewell to the stormy conditions upon passing the longitude of Cape Leeuwin, whilst Thomas Ruyant (Le Souffle du Nord pour le projet Imagine) is getting swept up again by a bracing westerly, Louis Burton (Bureau Vallée) is still kicking over the traces of a lively front that Stéphane Le Diraison (Compagnie du Lit-Boulogne Billancourt) and Nándor Fa (Spirit of Hungary) are devouring with delight and speed. Meantime, Conrad Colman (Foresigh Natural Energy) and Arnaud Boissières (La Mie Câline) are plunging into a light patch to hunt down Fabrice Amedeo (Newrest-Matmut), who’s headed off on his own to more distant yet noisier horizons to the South.

Further behind, the compact international pack is preparing for another lively phase. Indeed, Sébastien Destremau (TechnoFirst-faceOcean) is enjoying slightly more energetic conditions than of late, a few dozen miles from the longitude of the Cape of Good Hope and he is set to hook up with Romain Attanasio (Famille Mary-Étamine du Lys), who has been navigating his way around a rather breathless zone of high pressure since leaving South Africa. However, once they’re into the Roaring Forties, the situation is likely to get feistier again with the arrival of a hard new system barrelling into the Indian Ocean from Brazil.

Eric Bellion (CommeUnSeulHomme): “We’re going very fast. I’m enjoying my race and the albatrosses and sailing like this around the world sure is crazy. At the start, I didn’t really care about the race itself, I just wanted to be in harmony with the sea and my boat. It was so difficult to find my rhythm and my pace. The Vendee Globe doesn’t fit in with my expectations. I knew it was something crazy and I knew it was a long way around the planet… I knew many things. Now though I feel very, very lonely and I’ve only covered a third of the race with all the rest of the planet to go. It’s not something you can imagine unless you experience it and when you’re racing in it you feel so vulnerable and weak up against nature and the sea. Anything could happen, you could collide with a whale, have electrical issues… There’s always a big depression on its way, the clouds are tricky here and the swell is huge, which tells me I have to be very careful and find a pace that’s reasonable for me. The race is something huge and crazy and in other ways it’s incredibly beautiful. I am enjoying myself too though. I’m sailing downwind and I just gybed near the exclusion zone making 15 to 20 knots. I only discovered solo sailing last year and it was my first solo sail in an Imoca in May!” 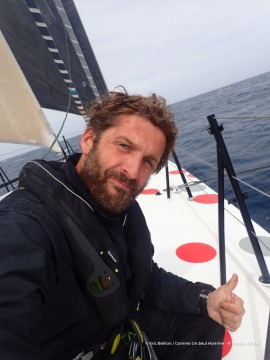 Thomas Ruyant (Le Souffle du Nord): “I was fairly well spared at the start of the race but I've had a few issues since I arrived in the Indian - that’s just how it is at the moment. The boat’s back up to 100% now though. I was up the mast this morning fixing the lazy bag and I have a few odd jobs to do but nothing very important. The cars, the battens and the leak are all fixed now but I can no longer use the original system for filling my ballast tanks. I’ve rigged up another tube system but I’m yet to test it. If that fails, I’ll have a go at using the bilge pumps so there are a few options. I’m on port tack right now so that’s not really a concern at the moment but psychologically it’s difficult to know there’s an issue there. I have 30 knots of breeze and I’m making 20 to 25 knots of boat speed under small gennaker and a slightly reduced mainsail. Now that my lazy bag issue is resolved I’ll be able to hoist more sail area as there are no gales forecast. In the coming days, I’ll have a westerly wind so there’s lots of gybing on the cards. Conditions are good and now that the boat’s intact I’m enjoying myself! My priority was on fixing my problems so now I can power up again. There’s a long way to go and my rivals are a long way ahead but anything possible and I’m not giving up. We took a hit with the damage so you have to learn to trust in your boat again to really go on the attack and that’s the case now. I’ve slept well and eaten well and Cape Leeuwin is on the horizon. Leeuwin is a legendary cape but I’m focusing on making headway step by step, happy about where I am today and the fact that I’ve made it this far. The Indian’s been complicated due to the damage caused by my errors but I’ve learned so much. I’ve got a good swell with lots of birds and a very majestic atmosphere.” 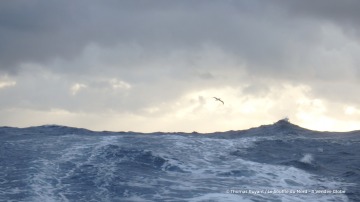 Fabrice Amedeo (Newsrest Matmut): “We are being escorted by albatrosses and a lovely ray of sunshine, which is magical and physical. We’ve been hit by 2 fronts in the past 48 hours with 40 knots of breeze, which has been good and the best reward the ocean can give us. It’s enabled us to dry out the boat a bit, which was getting very wet.” 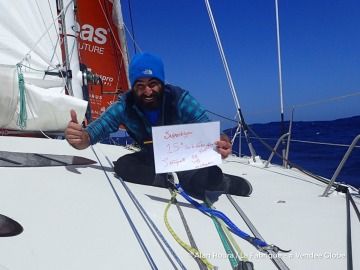 © Alan Roura - La Fabrique / Vendée GlobeAlan Roura (La Fabrique): “I’m in seventh heaven! I’m among a group of talented sailors and I’m doing really well! The Indian Ocean is a bit hard, a bit temperamental and you have to learn to understand it and play with it. It’s what I was expecting. Nothing’s changed on the boat. She’s in the same condition as she was at the start and that’s the objective I set myself. To download a grib file takes 1hr and everything’s slow. I’d love to be able to show you what’s going on around me and it means I can’t see the videos from my family either. There are several races within the race, between the leaders, the old hands battling with the rookies. It’s incredible! The sailors are making very different strategic choices, which makes for an incredible race.”

Louis Burton (Bureau Vallée): “After my encounter with all types of dolphins in the Atlantic and a whale to welcome me into the Indian, on Saturday morning it was the turn of a raft of penguins to come and greet Bureau Vallée! Once I’d got over the joyous amazement at seeing these creatures I said to myself: "but wait, usually a penguin doesn’t swim for long does it? Oh my g…! That means there’s ice around!” Just thought I’d share my morning anxiety with you… clearly this is not a race like any other. And if anyone knows anything about penguins, I’m all ears! Thanks in advance!" 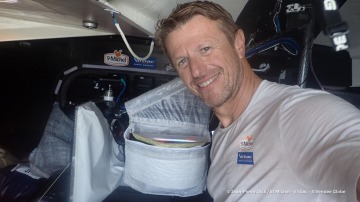 Jean-Pierre Dick (St Michel-Virbac): “For some it’s the tube, work, sleep and for me it’s manoeuvring, eating and resting.”

Kito de Pavant (Made In Midi): “I’m making the most of my sightseeing tour, which is pretty special aboard the Marion Dufresne with the albatross around us. Psychologically it’s tough. I wasn’t expecting things to pan out like that. It’s very rare. I’ve also lost 8 kilos since the start of the race, but the cook on-board reckons he’s going to plump me up again! Fortunately, I’m lucky to have partners who are supporting me and trusting in me. There’s a real sense of solidarity and it’s motivating me to find solutions. I’ve received hundreds of messages!”