Following the collision with an unidentified floating object late yesterday afternoon, the skipper of Le Souffle du Nord pour Le Projet Imagine competing in the Vendée Globe is in serious difficulty. He is in good health, but his boat is on the point of splitting in half. As a good sailor, after spending the night hove to, Thomas Ruyant is attempting to motor to Bluff in New Zealand, which is 260 miles away from his seriously damaged boat.

“The port shell has split open down to below the waterline,” declared Laurent Bourguès, technical director of Le Souffle du Nord. “The starboard shell is also delaminating. The structure of the deck is gradually deteriorating. The danger is that the front section may break completely away from the stern section. Thomas has attempted to fill in the holes. The boat is holding out thanks merely to its longitudinal structure. The starboard rudder is still in place, but only just. Thomas has been working on that. The idea is to get as quickly as possible to the southern tip of New Zealand in order to shelter, as the wind will be becoming much stronger tomorrow morning. Thomas has still not asked for assistance, but the Race Directors are keeping a close eye on the situation, should he asked to be taken off, which is quite possible.” 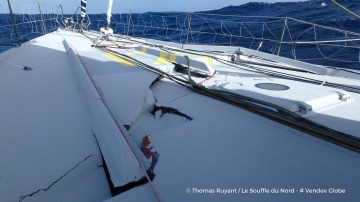 Thomas is getting ready for that possibility and has gradually got over the huge shock following the collision. “It was a bit like a car accident. The boat came to a sudden halt. It was an extremely violent shock. I felt extremely down about it yesterday, but I’m finding the motivation to bring my boat safely to port. That is my priority,” explained an undaunted Thomas.

The 180 partners and over 1000 supporters of Le Souffle du Nord pour Le Projet Imagine are offering their strongest support to Thomas Ruyant in this difficult time.