Each group of boats is now sailing in a different weather system. In the Pacific Ocean, 4 groups are on one side or the other of the two ridges of high pressure. 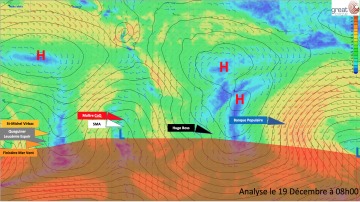 © Great CircleBanque Populaire VIII is now sailing in a south-westerly  wind at the back of the low pressure system, which is moving towards Cape Horn. Armel Le Cléac'h sailed perfectly through the transition between the high and the low pressure system, which has allowed him to sail in front of the ridge today (light wind zone in blue south of the high pressure area on the chart) which moves at about the same speed as him. Hugo Boss is on the back of this system in a northerly wind.

We have the same situation with the following two groups. SMA and Maître CoQ finally found the wind between the low pressure ahead of them and the ridge which follows them. The trio StMichel Virbac, Quéguiner and Finistère Mer Vent are sailing at the back of this ridge.

The Indian Ocean is quite similar with two big low pressure systems which are moving a little faster than the fleet. A high with its ridge (in blue) squeezes in every 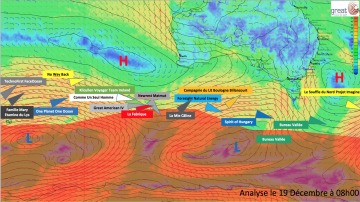 © Great Circletime between low pressure systems. There are really no options to be played at the moment. Each skipper is concentrating on speed to stay for as long as possible in their system before being caught by the following ridge.

The next big low pressure system is expected to affect the back of the fleet from December 22nd.