> News > The light at the end of the world

While Cape Horn is just a bare rock, the Island at the end of the world is a piece of land fully deserving its name.  With 125 lakes dotted around it, its relief is very hilly with its highest peak at around 800 metres.  For twenty-five days a month, rain and more often snow, falls on its black rocks and its lush greenery is constantly swept by very violent winds. Fog and mist are present all the time and when the sun finally peeks through, it is with great difficulty that it sends the temperature up to 5°C. But that is enough of the geography lesson, as this island has another story to tell us.

There was a man who was a bit crazy, who preferred living his dreams rather than heeding the wise and boring voice of reason. One day by chance, as he was sailing in the area with a few friends, he decided to go for a walk on the island they were just passing - Staten Island.   With a final wave, the boat sailed away.  André (who??) feeling relaxed strolled along the beach and rocks with his hands in his pocket.  But one rock is very much like another and one twisted tree is like another too. Within a few hours, André was lost. Shivering with the cold he only found his friends again four days later, Starving, in bare feet, exhausted, he had been trapped by the wilderness.

However, in spite of the nasty punishment dished out by this island, the adventurer fell in love with it. He found nature there in its wildest and purest state. There were no evidence of man on this bit of land.  A little over a year later in December 1995, after learning how to use a bow and arrow in his garden in La Rochelle, André nicknamed Yul, set off again this time to spend three months alone on his bit of land at the end of the world.  Carrying a tent, a bow  and arrows, he intended to live there, by hunting and fishing for three months in the southern summer.

He was to endure cold, wet and windy weather.  His clothes were soaked, as he could not find a place that was flat and dry enough to put up his tent.  Like a bear, André took refuge in a little cave. He found it stifling, and that was largely due to the smoke from his fire, but above all there were simply no windows!  So he built himself a shelter in the trees… Finally he was dry and could breathe easily.  Tossed around by the wind, he was initially worried, but got used to it. When the thunder rang out, he resigned himself to saying farewell to his canvas tent! One day, while strolling on the Eastern tip of the island, he discovered the ruins of a lighthouse made of wood. Back in France, a few weeks later, André began to do everything he could to rebuild that lighthouse and promised himself that by the year 2000, a light would shine again in the dark south.  His idea was thought to be whimsical, but gradually attracted the attention and interest of those who heard about it.

A lighthouse in Tierra del Fuego

Built in 1884 by Argentina, this lighthouse was very different from those we usually see.  70 metres above sea level, an octagon measuring 6.50 metres high and 11 metres wide was built with a pointed roof. Behind its front looking out to sea, there were seven lamps, which used rapeseed oil.  Their beam was projected in a field of 93° and reached 15 miles thanks to some huge lenses. It was an attractive construction, with two rooms inside: one was a dormitory for the three keepers and the other was full of supplies and tools. Left alone for weeks on end during the storms, these men, who ensured that the light kept burning, took it in turns to take care of the seven flames, which each consumed a kilo of oil per day.

In spite of its usefulness, the lighthouse was abandoned in 1902. Jules Verne, inspired by the idea of this distant island and by the conditions experienced by the three men, wrote the novel «The Lighthouse at the End of the World.»  In 1905, when this book was published, the lighthouse and writer had both closed their eyes. 96 years later, charmed by this book, enchanted by the island and its history, and full of energy with the support of a group of loyal friends, some financial partners and with the agreement of the government of Argentina, André saw his not so crazy dream come true: rebuilding the Lighthouse at the End of the World.

So, since 28th February 1998, the island at the end of the world is winking again at sailors, who pass… If you want to see something special, head for La Rochelle on France's Atlantic coast and close to the beach you will discover a replica of the Lighthouse at the End of the World, which since February 2000, has been showing the way for mariners. 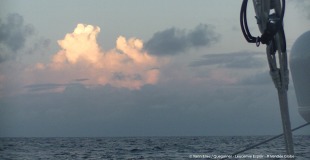