The big losses which Vendée Globe leader Armel Le Cléac’h has suffered over recent days to the British skipper Alex Thomson have stabilised today but the French solo racer who has topped the solo round the world race since December 3rd seems set to come under more pressure from his pursuer in the coming days.

A wide swathe of lighter, variable winds blocks the northwards climb up the South Atlantic. Some weather routing models have the two leading skippers racing at the same latitude at the weekend.
After making a net gain of some five miles during this Wednesday afternoon, Thomson was 269 nautical miles behind on the 1700hrs UTC ranking.

While the leaders’ problems in the South Atlantic are largely about the mental stress of routing through a network of light airs and transition zones, New Zealand skipper Conrad Colman has been forced to push his Foresight Natural Energy close to the limit to stay ahead of a ‘terrifying’ low pressure system. And one thousand or so miles to Colman’s west, Ireland’s Enda O’Coineen has had to take the prudent, but tough decision, to turn back north and separate away from the six strong pack of boats he had been racing closely with, playing tag with the back of that same depression. O’Coineen is diverting to Stewart Island, just off the tip of South Island New Zealand in order to make repairs and continue his race. 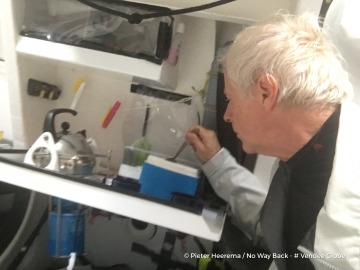 After remaining hove to, stopped, for nearly 48 hours to the south west of Australia, seeking to avoid a windy depression to his south and east, the beleaguered Dutch skipper Pieter Heerema has resumed his eastwards course in 19th place, holding high hopes that the ‘complete rebuild’ of his automatic pilot system will be reliable enough to allow him to finish his Vendée Globe. “I am going to speed up a little now, as long as the technology holds out. If it does then I am a happy man. I have completely changed out every part, every thing except the wiring. I am on a completely new pilot, a new ram, everything, new processors, computer. The gurus, the brains were not brainy enough to find out what the problem was. I have tried for days and that is the answer this morning.” 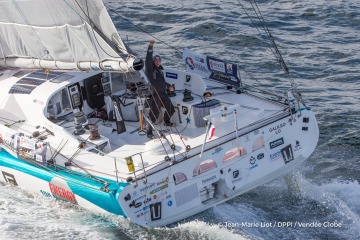 Conrad Colman (Foresight Natural Energy): “I was really concerned about this massive depression behind me because in the days before it struck the pilot started acting up again and I was terrified that it would force a wipeout in 40+ knots of wind. The solution was to put in place my spare wind instruments on the back of the boat instead of continuing to repair the primary units on at the mast head. Positioning myself in front of this system was a gutsy move but it has worked out better than expected. I just needed to maintain enough speed in strong conditions to avoid being caught up by the truly terrifying wind and waves in the center. However as the barometer dropped to 980 mb (!) and dark clouds gathered on the horizon behind I didn't feel quite so clever! Thankfully I judged my pace to not break anything and I have still outpaced the center and the barometer is rising again so it looks like another well informed gamble has paid off.”

“I was really afraid I would have to face the full anger of the Southern Ocean. I have avoided the worst, but it’s still quite rough. The boat is bouncing on the waves and it’s hard to stand up even inside. It’s complicated getting any work done, as it is so cold. After a few minutes out on deck, you can’t feel your fingers any more. You need to be fast and efficient. Later, I’ll be able to hoist some more sail to try to catch Nandor (Fa). I should have good conditions to be fast. It’s fantastic to be in the Southern Ocean in these conditions. That’s what I came to the Vendée Globe to find.” 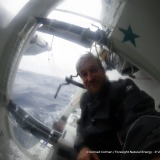 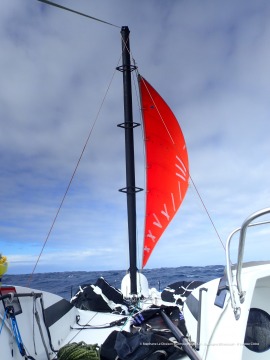 © Team S. Le DiraisonStéphane Le Diraison (Compagnie du Lit-Boulogne Billancourt): “I dismasted eleven days ago. Since then, I have been making slow progress towards the coast of Australia. I’m heading for Melbourne. I should get there in around 36 hours. I hove to off Portland to make sure I could continue. I’m currently using my jury rig rather than the engine. I have had my best surf for eleven days- sailing along at eight knots. I haven’t yet come to terms with retiring. I see it as fate. I did everything I could to avoid something like that. I was let down by the gear. There are several ways to experience the Vendée Globe. The best is to finish of course, but even if you don’t complete the course, you have still overcome a number of challenges. I learnt a lot out on the water. I didn’t have any real experience of IMOCA sailing before. I now understand these boats much better and know their limits. I’m going to make the most of what happened to get something positive out of it.”

Play the currents in light winds