> News > Tiny dots in the Atlantic

With a surface area of 82 million square km, the Atlantic stretches out to the shores of three continents, Europe, Africa and the Americas. It reaches a depth of 8,605 metres off Puerto Rico and its average surface temperature goes from 2°C near the Arctic and Antarctic to in excess of 26°C between the Tropics of Cancer and Capricorn.

Thanks to these temperature differences currents develop with warm waters from the tropics generating the Gulf Stream and cooler waters coming down from Greenland (Labrador current). The Atlantic formed 180 million years ago with the movement of the tectonic plates. A huge underwater mountain chain stretches down from Greenland to 58° S with a few islands poking up above the water.

In the seventh Century BC, Phoenicians and Etruscans came out of the Mediterranean via the Straits of Gibraltar to go down as far as Cape Mogador in Africa, up to Cornwall and maybe even Iceland (Pytheas in 320 BC), and out to the west to Madeira and the Canaries. Then, the Vikings, Genoese and Portuguese discovered the New World between the 10th and 16th Century. This lead to the opening of routes to Asia via the South Atlantic (Good Hope and the Horn) enabling the conquest and mapping of the whole world.

In olden times, tales surfaced about a paradise off the Columns of Hercules: Atlantis. This land is said to have been submerged leaving just a few islands. The Azores brings together nine islands. They were first mentioned in the Medicis Atlas in 1351, but were discovered by a serving Arab King Roger II of Sicily in 1154. The Azores were colonised by the Portuguese in 15th Century, after they had been visited by the English, Dutch, Spanish, Belgians and French essentially, as they were seen as a stopover point between America and Europe.

Off Portugal, Madeira is well known for its lush vegetation, the Garden of the Atlantic, its sweet fortified wine and its sugar cane and banana plantations. The Canaries were probably familiar to the Phoenicians and Carthaginians, but were colonised by the Genoese in the fifteenth Century. The locals were wiped out and the islands were the scene of several battles between the Spanish and Portuguese. When the world was divided up by Pope Eugene IV in 1435, the Canaries were handed to the Kingdom of Castille. Off Senegal, the Cape Verde Islands bring together fourteen semi-arid, poor and lightly populated islands.

In the South Atlantic there are very few islands. Fernando da Noronha off Recife (Brazil), Ascension and St Helena to the south of the Gulf of Guinea, Trindade and Martin Vaz to the east of Rio de Janeiro, Tristan da Cunha, Gough, Bouvet and South Georgia in the 40s and 50s, and the Falklands to the east of Tierra del fuego. Trindade and Martin Vaz is made up of four other rocky isles between 20° S and 30° W. These islands are only inhabited by petrels and a small Brazilian military unit. In a previous Vendée Globe, Raphaël Dinelli attempted to moor there to repair his halyard. But he was unable to do so, as access is incredibly tricky and it is hard to drop anchor safely…

Desejado Peak is the highest summit on Trindade (620m), which is home to the Paredao volcano. The islands were discovered in 1502 by Estêvão da Gama, a cousin of Vasco da Gama, who handed them over to the King of Portugal. But in 1700, the British astronomer Edmund Halley took possession during his second voyage to the South Atlantic to study the earth’s magnetic field. La Pérouse subsequently landed there in 1785 before heading off to the Indian and Pacific…

In 1893, an eccentric American, James Harden-Hickey, spent a few days there and proclaimed himself Prince of Trindade, James 1st. This military dictator issued stamps, drew up a flag, had his own money, an order of chivalry and opened a consulate in New York to have his country recognised. Two years later, the British wanted to regain control, but were removed by the Brazilians, who added these islands to the region of Espirito Santo. 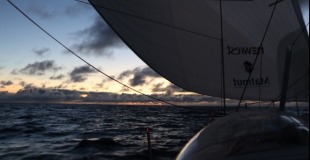 The light at the end of the world