The duo which are clear leaders in the Vendée Globe, Armel Le Cléac'h 160 miles ahead of Alex Thomson, are still making only moderate speeds beating upwind in contrary, N'ly winds. They are making east as they seek to connect with the E'ly trade winds which are still a further 400 miles - or just over 24 hours to their north.

The British and French skippers should reach the more favourable breezes at around the same time, tacking on to starboard for the long climb north towards the Doldrums. Because Thomson is further to the east - albeit always playing with slightly less wind in recent days - his payback should come when he reaches the trades at around the same time as his French rival. Weather modelling shows another small comeback for Thomson against Le Cléac'h, the north south separation of 130 miles this morning reducing progressively. The tension is set to continue into the North Atlantic, assuming both have a similar Doldrums crossing.  But the duo do seem to remain connected, in some ways reprising the 2012-13 battle between Le Cléac'h and eventual winner François Gabart.

So too the duel between Nandor Fa and Conrad Colman, eighth and ninth at 213 miles apart, takes an interesting turn. The combination of a thalweg - a elongated ridge of low pressure - which Fa is behind as well as high pressure to the south means the duo are having to detour almost 400 miles to the north of their rhumb line course to Cape Horn. They are in the middle of the Pacific, 1200 miles behind Louis Burton, and Colman was fairly slow last night losing some ground to the Hungarian, Fa (Spirit of Hungary, but he may regain as he is now sailing downwind in a 30-knot SW’ly wind, while Nandor Fa – just 200 miles ahead of him – is upwind in a 25 knot NE’ly wind. 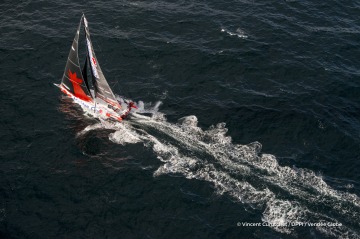 Everything is going well for the four other boats in the South Atlantic. Jérémie Beyou (Maître CoQ) is firmly in third place, just over 720 miles ahead of Jean-Pierre Dick’s StMichel-Virbac. The latter has just dealt with another low and has picked up speed again 400 miles NE of the Falklands and 150 miles north (75 miles in terms of distance to the finish) of the inseparable pair, Yann Eliès and Jean Le Cam. Just under 1700 miles from the leader, the skipper son Quéguiner-Leucémie Espoir and Finistère Mer Vent are fighting it out for fifth place and to be come the first non-foiling boat to finish. Yann Eliès has a slight advantage this morning (15 miles) but Jean Le Cam has just gybed in his wake. It looks like this duel could also continue all the way to the finish. Even if he has to go a long way north to avoid an area of light winds, the seventh skipper  expected to round the Horn is Louis Burton (Bureau Vallée) on around 48 hours from now. He is 660 miles from the famous rock and is advancing well. 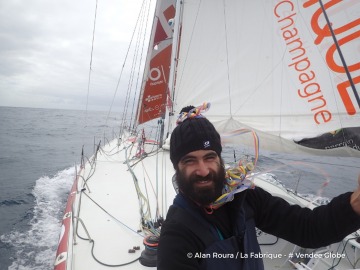 As for the group of five with in order Eric Bellion (CommeUnSeulHomme), Arnaud Boissières (La Mie Câline), Alan Roura (La Fabrique), Fabrice Amedeo (Newrest-Matmut) and Rich Wilson (Great American IV), they are gradually getting caught by a low with strong winds up to 40 knots forecast with Wilson the first to be affected. Catalan sailor Didac Costa (One Planet One Ocean) has got further ahead of Romain Attanasio, slowed in an area of calms this weekend, but the skipper of Famille Mary-Etamine du Lys has finally got moving again (at 13 knots), after entering the Pacific yesterday evening after crossing the longitude of South East Cape, Tasmania. Costa and Attanasio will be facing another problem with a deep low forming east of New Zealand, and they will be attempting to avoid the worst of the winds in the next 48 hours.

At the rear of the fleet, Pieter Heerema (No Way Back, 18th) and Sébastien Destremau (TechnoFirst-faceOcean,17th) are sailing close to the coast of Tasmania.  Sébastien Destremau expects to reach a bay north of Hobart on Monday evening, as he explained this morning in a message. “Port Esperance is the most likely destination. ETA sometime Monday night but will most probably wait offshore for daybreak. Length of the pit stop will depend on the state of the mast/rigging up there. Say between a few hours and a couple of days. It will be the first time I have seen land since seeing Madeira in the distance on November 11 and the first time I have seen faces since the start on November 6.”

Rich Wilson (Great American IV): “We are in the gale. We have 35-40 knots of wind now and it looks as though this will last for another 18 hours. Then we get to the center of the storm, and then the same, about 24 hours of storm from the south. Depressions rotate clockwise here in the Southern Hemisphere, thus the two directions on opposite sides of the storm. We have 3 reefs in the mainsail and the storm jib up. We are trying to be very conservative to save the staysail that was laboring in the beginning of the storm with a higher wind angle. As the wind has shifted from North to North Northwest, we have continued to go east, and so the angle to the wind has gotten bigger, which helps. The waves are about 12-15 feet, and now starting to get angry. One wave just hit the boat and pushed it to starboard about 3-4 feet, almost hammering my face with the port side of the chart table. I have my helmet here and may use it at the chart table.”