Home News Sniffing out the trade winds off Brazil

In the ongoing duel up the South Atlantic at the front of the Vendée Globe round the world race over the last 24 hours Alex Thomson has made a small, but valuable gain against his French rival Armel Le Cléac’h. As the pair raced eastwards at the latitude of Rio and just a little northwards, the British skipper of Hugo Boss has been able to close gauge, reducing the north-south lateral separation by some eighty miles.

The leaders have been sailing east to sniff out the trade winds. Despite sailing on port tack, the side on which he has no foil and so has less lift and traction than his rival, Thomson has had a better more lifted wind angle which has allowed him to angle slightly more northwards. Le Cléac’h (Banque Populaire VIII) should be first on to the ‘making’, more profitable north-going tack this afternoon, touching the trade winds first. Once both are on the same northbound tack, Thomson’s strong side, Le Cléac’h should gain for the coming 18-20 hours as he enjoys the benefits of a slightly strengthening and more lifted breeze. But once both are into the same trade wind breeze this should be closer to the British skipper’s sweet spot and he should be quicker, once again be able to redress the balance in his favour. 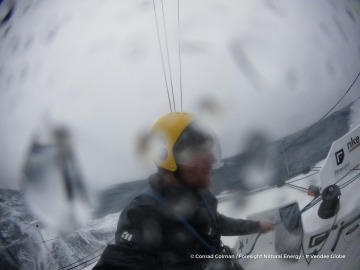 Unexpectedly rough conditions, gusts to 60kts, have this afternoon placed Conrad Colman in a tough position in one of the most remote area of the Pacific Ocean. Colman so skipper on Foresight Natural Energy has been slowed this afternoon at around five to six knots, suffering a problem with his standing rigging which he will need to wait until the worst of the very active system diminishes before he can take stock. The strength and activity of the system was not apparent on some models yesterday, the race forecast for today announcing: “For Nandor Fa and Conrad Colman the depression they are sailing in does not completely correspond to the weather models from yesterday. It is more active and slightly further east than expected, which has complicated the task of the Kiwi skipper. Winds are blowing in a range from 45 to 55 knots with gusts in the 70s until 1700hrs UTC in the Southwest quadrant of the depression, which is the exact place where Conrad was early this afternoon. Conditions should then improve from then on” 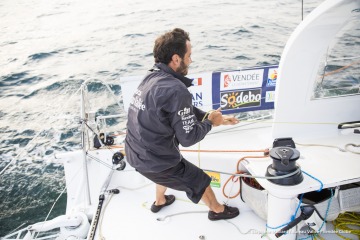 Louis Burton’s race so far has been most remarkable for its quiet, under-the-radar consistency. The solo racer from Saint Malo on Bureau Vallée has seemingly been blessed with steady conditions all the way across most of the Indian and the Pacific. He is due to round Cape Horn late tomorrow night for his first time. Burton started the last Vendée Globe but hit a trawler off the Portuguese coast and had to retire. He has sailed more than half of his race in splendid isolation, 1000 miles ahead of Nandor Fa and now 1200 miles behind the duo of Jean Le Cam and Yann Eliès. He knows his boat well, the Farr designed ten year old former Delta Dore, making his IMOCA debut in 2011 when he took fifth in the Transat Jacques Vabre with his brother Nelson. 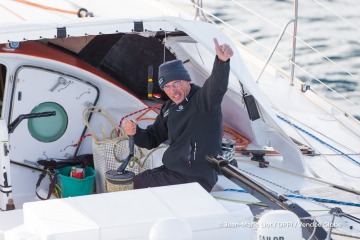 In 18th place, Sébastien Destremau expects to pitstop close to Hobart on Tasmania tonight or tomorrow as he seeks to check his rig and rigging fully before venturing into the Pacific for the first time with his 1998 built IMOCA TechnoFirst-FaceOcean which started life as Josh Hall’s Gartmore. Destremau had to replace the rig just weeks before the start of the race and only managed to sail from the Mediterranean to Les Sables d’Olonne with his new mast before starting.

Didac Costa (One Planet One Ocean): “A difficult week comes to an end. The low to the south of Australia put the boat and me to the test. Every nm earned had a high cost, with accumulated fatigue for the equipment and some damage. Apart from the problem I already have with the sails, I have the added one of the autopilots now. You can imagine how important these are to solo sailors. Within the different parts that make up the autopilot, there is one that especially suffers wear after several weeks of sailing: the mechanical arm (piston and motor), that never stops working to maintain the course. Something similar to what happens with the sails on board has happened with them. They have begun to give worrying signs of wear. When I was replacing the original arms for the spare ones, I had an electronic problem that left me without autopilots for a few hours. It happened when I had been two days with any sleep and the solution was not so obvious. The relief was huge when I managed to fix it, because I had quickly found myself in an extreme situation: without autopilots, exhausted... Down here a small problem can quickly become a big problem.” 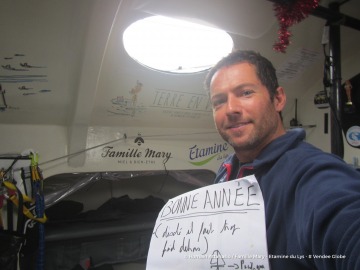 © Romain AttanasioRomain Attanasio, Famille Mary-Etamine du Lys: "Yesterday was a horrible day and I really went mad. I had worked so hard to catch Didac and there I was at a standstill. He made it through this transition zone, while I got caught. Today, I have got going again. I have done a lot of work on the boat, cleaning her up and repairing things. Ahead of me there’s a huge low forming. In fact, being slowed down yesterday means I will avoid the worst of that, which is no bad thing. Michel Desjoyeaux once said that the Vendée Globe is one big problem each day and that is true. Today I have a problem with the autopilot. I need to change one of the wires. A couple days ago it was my wind instruments and yesterday I repaired a batten and a halyard. You have to deal with these things before it gets worse. I knew the Vendée Globe was tough, but not how tough. When I look at how much I have left to sail, I find it hard to believe. I can’t wait to be in the Pacific. I’m 4000 miles from Cape Horn.” 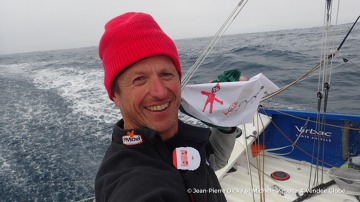 Jean-Pierre Dick, StMichel-Virbac: "It’s been complicated over the past 24 hours as I have had winds in excess of 40 knots. I entered an area of low pressure and am trying to cross the centre. I had to take in some reefs. It’s been tiring as there are lots of manoeuvres to do. It’s frustrating to do so much work and not be fast. Yann (Eliès) and Jean (le Cam) have narrowed the gap. The wind is now down to twenty knots, but will gradually strengthen and I’ll be upwind, which means a lot of work out on the deck, trimming and changing the sails. It’s not very easy, although I don’t have any major problems on the boat.” 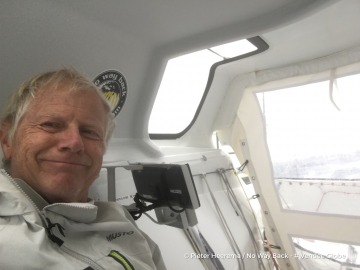 © Pieter Heerema/ Vendée GlobePieter Heerema (NED) No Way Back: “I am just past the south of Tasmania and it is all going well. As always you prepare a little for the New Year and then the wind got up and I was busy and the boat was bouncing around and so there was no New Year and no party. The last two days have been tough weird winds with gusts, not particularly strong but with big, big winds. I can only sail on compass mode. And so you cannot go too far from the tiller or the push buttons. That keeps you busy all the time. The wind will increase steadily over the next day or day and a half. In a couple of days I will have 30-35 knots behind the front of a depression. I have one of these new fast boats and it is a bit sad I have not been able to let it perform like it should. It has new development foils which are really superb but I have not been able to show that because I have had these problems. Only now can I start to put the foot down and go a little bit faster. I will speed up a bit but mostly I will try to stay wise and prudent.” 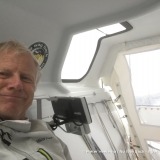