Legend has it that the Cape Verde Islands covered the Atlantic, when God rubbed his hands together after creating the Earth. But the angels told the Creator that there was nothing left for men to live on in these islands. When the Venetian discoverer Alvise Ca’da Mosto spotted the islands in 1456, there was no one. It took a long time to colonise the islands, because teh Portuguese Henry the Navigator was more interested in spices and gold than by these remote islands. The Genoan Antonio Da Noliwas the first ashore on these volcanic shores and called them Cape Verde referring to the point of Senegal opposite them on the African continent.

The discovery of the New World would transform these islands into a deportation platform to supply labour to the colonies. Pope Alexandre VI forced the Spanish and Portuguese to divide up the world in the Treaty of Tordesillas in 1494, (the West with the exception of Brazil to the Spanish and the East to the Portuguese and the trading began. The slaves gathered from Senegal, Gambia, the Ivory Coast and Ghana and down to Mozambique, needed a stopover point to get supplies of food and water. The Cape Verdes were perfectly located before the crossing to Brazil. But there was nothing there to feed them, so everything had to be brought from the continent to develop some form of agriculture.

Coconuts, mangoes, soursop, sweet potatoes, millet, beans, pineapples, manioc, papayas… which are now part of the everyday diet of the inhabitants were brought from the Indies and Brazil. In the 16th Century, the islands became a trading post bringing together outcasts from Portugal and Europe, prisoners, Jews persecuted by the Inquisition, heretics and slaves from Africa.

The white people didn’t like the climate and were decimated by malaria. Civic rights and education were supposedly reserved for Portuguese citizens, but could not be applied in the Cape Verdes as it was in Angola, Mozambique or Guinea-Bissau. Mixed race citizens and blacks were able to take care of the island, even if slaves still had to carry out forced labour…

This led to a melting pot, because in spite of what was laid down by King Manuel 1st (1469-1521), who sent Portuguese women to the islands, the white population preferred dark skins. The country obtained its independence in 1975 and has been marked by this mixture of cultures.

Only a few islands were initially colonised as São Vicente only became inhabited in 1727 and Do Sal in 1781. Drought struck from 1747 making life harder on these islands. This was largely down to the trees being chopped down and the invasion of goats. The population was decimated under the dictatorship of Salazar when a large part of the the population moved to New England after the whaling period at the end of the nineteenth Century.

Taken under the wing of a repressive Portuguese regime, Amilcar Cabral founded an African independence part for Guinea and the Cape Verde Islands: the two former colonies took advantage of the Carnation Revolution in April 1974 to proclaim their independence before separating with the uprising in Guinea Bissau in 1980.

The climate is particularly stable on the islands throughout the year with the temperature going from 25 in January to 30°C in the summer with a humidity level averaging 70% as it rarely rains (around 125 mm a year). Located on the southern edge of the Azores high, the islands benefit from the trade winds from the NE throughout the year with very few calms and very few gales. The northern islands (Barlaventos) get more wind than those in the south (Sotaventos) and the wind strengthens as it funnels through the islands.

The altitude reaches 1979 metres on Santo Antão and 2829 metres on Fogo. The skippers need to keep away from the islands as to the west the wind shadow stretches out for thirty miles or more. We cannot leave these islands without mentioning the name of the singer Cesaria Evora, who died five years ago. 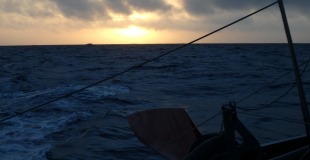 Back in the Doldrums