If Malo1Dabord, MBpneu Plouescat29 et Andy Cap, current leaders thanks to their positioning, are risking all by pointing toward the African horn, others, on a north-western route will try to fetch the north-easterly flow which is currently blowing between 12 and 15 knots. In the middle, lots of skippers are becalmed in the Doldrums and are more or less patiently waiting for the wind to come back. In short, as you would have guessed, the royal way is not open yet and one will already have to well anticipate the route in order to get to the best position for the Azores High, next big challenge ahead. 4,000 of you are already in the Northern Atlantic Ocean and there will be heavy traffic on the northbound passage during this weekend. While further back in the Pacific Ocean, many of you will also enter the Atlantic Ocean during this weekend. The Pacific Ocean is little by little getting emptier, even if many of you are still in the lows of the planet’s largest ocean, side by side together with the Vendée Globe sailors still struggling there. Good luck and have a nice weekend! 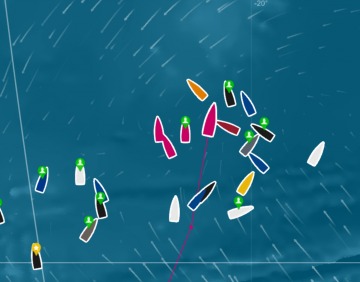 In the same way as for the Virtual Vendée Globe, the Atlantic Sprint is not having a wonderful time in the Doldrums either. The start, close to the Equator, has not helped the trajectories, either in the East or in the West, and the result of it is that a vast majority of the sailors are nailed down in dead calms and trying to find a way out. At the ranking of this quite slow sprint, blkhd48 is leading ahead of gestamp28160 and jjardoino. 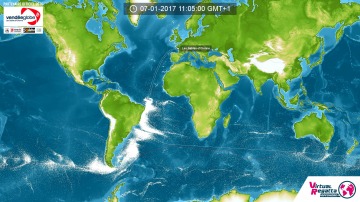