> News > ADVANTAGE TO THE WEST, AGAIN

Rather fast since 24 hours on a due north course, didflam, NZ Eligo, Istishia, phosphor IST and many others are successfully carrying out the hat trick of the weekend. Lying in ambush since several days, it was fair to bet that their route would pay off at some point or another. It’s done since tonight and the transfer of power between the eastern skippers and those in the middle is under way, especially because the conditions there are better to gain to the north. However, the wind, which appears to be more regular along the African coast, could enable some to use this narrow corridor to attempt a coup. The low-pressure zones scattering all the way up to the Sables D’Olonne will certainly dictate the outcome of this option. So who will be right, at the end? We’ll have to wait till Wednesday to have a first balance of these strategies.

For the Atlantic Sprint, unlike the Virtual Vendée Globe, it works in the East. The leaders will however have to tack in the next hours to gain in the West, to avoid being stuck along the nearby Africa. At the present time, Blkhd48 is leading this sprint that completely differs from the Virtual vendee Globe. Use this this cold and grey Sunday of rest to refine your trajectories and set your strategy for the coming week. Do not forget that one should sometimes lose ranks to gain much more at the end. 2,600 NM away from the finish line, the die is far to be cast. 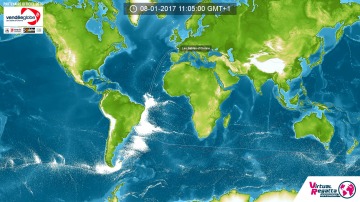