Meanwhile the western sailors are gaining field northbound and are crunching the remaining miles to the finish line.  The first virtual player, Didflam, practically at the latitude of Cape Verde, is only 2,499 NM away from the finish line. On her way up north, she’s followed by mangina PYR and NZ Eligo IST. The 3 leaders are less than 4 miles apart and the fourth is already 14 miles behind. But that doesn’t mean than the route ahead is as clear as it should. They’ll have to find the good trajectory to gain up north and chose the right moment to incurve the course towards the Sables d’Olonne.

The Atlantic Sprint’s leaders’ pack, presently in the southeast of the Cape Verde archipelago, is already facing a strategic choice: do they have to pass east or west of the archipelago? It seems the West option is more reasonable but the East one is not as closed as it looks. For the time being, the advantage goes to gestamp28160, which is leading the pack, 2,450 NM away from the finish line.

Hello, I’m on your starboard, few miles away from you. As I was 263,650th on the 7th day, I’m quite happy to find myself at this rank today. Have a nice day! Benoît on Concept-Es

We’re crossing the Equator at the same time! But I think I’ll turn back, finally; I don’t want to come back to France.

In the reign of uncertainty, it’s still impossible to know WUSPREVAILING, the wind, the sea, the boat or the man. Thanks for this fascinating game…

Howdy! Best wishes to everybody! After a backward start, one grounding and Atlantic down slide with little strategy, I’ve gained 168,000 ranks back. Yess!

Hello! I’m Armel Lecléac’h’s nephew; the virtual race is very exciting! It’s complicated climbing back up the Atlantic Ocean but we like it!

Just by mere curiosity, I checked the game’s evolution one week after the start. The improvements have convinced me and I went into it at full tilt. We’re getting closer to the reality and it’s GREAT!!! Thanks. My goal is to finish ahead of VRNEWS. Fair winds and seas to you!

Hello, it would be nice to have a screenshot of the whole fleet as you’ve done in the Southern Ocean. Thank you. 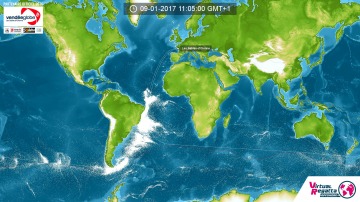