> News > SCHOOLS STEADY AT THE HELM

Teacher in the Raoul Rebout secondary school, Cécile Debourg is managing the boat TeamUlysse with her 9th grade Local School Inclusion Unit (it's a Special Educational Needs Unit for mentally and cognitively disabled children). Her 12 pupils are between 12 and 16 years old and are currently 43,214th. The boat is presently in the Southwest of the Cape Verde islands.

"4 years ago, I have followed the Vendée Globe with my pupils. This year, as we have a computer able to access the game and a video projector, I have decided, in addition, to take part in the virtual race, because it's easier to watch together on a large screen and it motivates more the pupils. Everyday we check where is the boat, we observe the wind direction, the headings of the nearest boats and we decide of the trajectory for the next 24 hours. For the days off, I do respect the decisions of the pupils. I have noticed that my pupils are very much influenced by the lines visible in the game; they very often want to "follow the line" (especially the red exclusion line), and at the present time, it's the line of the route we've followed at the beginning and crossing again, and which is currently visible on the displayed area. In parallel we have a World map in the classroom, on which we are using pins to materialise the journey of the real skippers. Thanks to the Junior Vendée Globe educational kit, we are reading a lot and learn lots of vocabulary.

There is also some work in geography with the knowledge about the continents (we are about to work about the countries we've sailed along. There are also the Vendée Globe official comic strips. Taking part in the game allows the pupils to hold on a long-term project. We also have debated about "what is a hero" and “what is taking risks”... One pupil follows the Vendée Globe on l'Equipe TV channel.”

If the Southern Atlantic Ocean has been a succession of tacks and gybes, the climbing of the Northern Atlantic Ocean, is by contrast, a long straight line. Currently 450 NM South off the Azores, the leading pack, still led by Mangina – PYR, will shortly have to think on how to sail around the high that, from the weekend onward, will sit off France and will literarily block the way to the players. We will all have to get round it by the North; cutting thru it would be shorter but very dangerous in terms of performance.

The Atlantic Sprint frontrunners are currently 220 miles behind the Virtual Vendée Globe leaders and they also will have to sail around the Azores High. Pen Gwen 7 still leads ahead of Exigent and Sail36. The conditions are presently ideal, so let’s enjoy this nice navigation in the trade winds, while in France, the snow is about to fall in the plains. 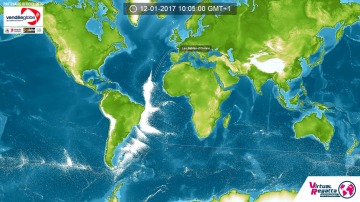 Thanks to you all for your messages.

Embark for the virtual race around the world! Join us at: