Thomson revealed yesterday that in order to stand a chance of overhauling French skipper Le Cléac'h before the finish of the solo round the world race he must get to within 50 miles of him in the next few days. At the 1100 UTC position report yesterday Thomson's Hugo Boss was 227 miles adrift of Le Cléac'h's Banque Populaire VIII as the pair passed to the west of the Cape Verde Islands. At the same time today that deficit was down to 151 miles as light winds forced Le Cléac'h to slow to just three knots, almost four times slower than Thomson's 11.9 knots. Thomson too will see speeds drop as he hits the dead spot but with several days of light-wind sailing ahead before stronger south-easterlies fill in near the Azores even the smallest of gains were welcome.

Thomson was not the only one with reason to celebrate. Crossing the Equator yesterday 13 days, three hours and 59 minutes after rounding Cape Horn, Jean-Pierre Dick set a new race record for the passage. Incredibly he shaved almost 16 hours off the reference time of Vendée 2012-13 winner François Gabart of 13 days, 19 hours and 29 minutes. In fact, Dick was just the first of four skippers to beat Gabart's time. Thomson posted a time of 13 days, five hours and 30 minutes, Yann Eliès took 13 days, seven hours and 20 minutes while Jean Le Cam was just 37 minutes behind. In stark comparison, race leader le Cléac'h was almost 32 hours slower than Dick over the same distance, but his woes did not stop there. His losses caused by a painful crossing of the Doldrums were today laid bare. Fifteen of the race's remaining 18 skippers made gains on Banque Populaire over the past seven days. Frenchman Eric Bellion has been by far the biggest winner in the last week, pulling back 641nm on Le Cléac'h, with Jean-Pierre Dick was next in line making back 388nm. Only Thomson and 17th-placed Pieter Heerema lost ground on Le Cléac'h, Thomson dropping 26nm to the leader and Heerema losing 10nm. 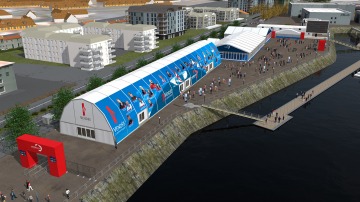 The Vendée Globe finish line is now within 1,800 miles of Le Cléac'h, and his ETA in Les Sables remains Thursday January 19th. Race HQ has now moved from Paris and is set up in Les Sables ready for the opening of the race village tomorrow. Doors to the village, at Port Olona, open to the public at 10am local time and visitors can enjoy an exhibition on the race, shop for official Vendée Globe merchandise or relax in the race's legendary bar and restaurant, the VOG. A huge screen will show the arrivals live from the finish line to the pontoon, and skippers will then be interviewed on the main stage.

Tune in to the Vendée Live show tomorrow on the race website at 1200 UTC for the latest news from the Vendée Globe. 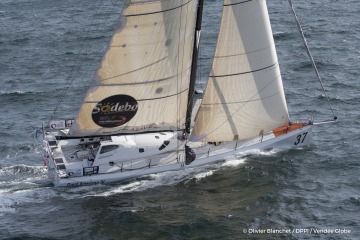 Rich Wilson (Great American IV): “We are in the depression, with 25-30 knots of wind, and forecast to go higher into the high 30s. The challenge with this storm is how big it is, and that the waves will continue to grow larger, since the wind will last for so long. We started with 2 reefs in the mainsail and the solent. We went through the night with that, I tried to escape with the noise-canceling headphones in the sleeping bag, as once we were setup there was not much to do on deck. I would get up every hour and go out and look to see how we were getting on. All was fine in the low 20s, but when we got higher, the boat was taking off on huge 22 knots runs, but the pilot was having increasing difficulty keeping us from a big broach or a potentially catastrophic gybe. So we have made two sail changes, to the staysail from solent, and to reef 3 from reef 2. We are slower, but we are in better control. How this will affect our future position relative to the weather at Cape Horn, we will have to wait and see.” 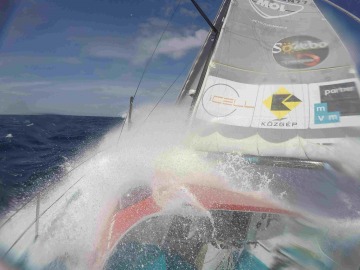 © Nandor FANandor Fa (Spirit of Hungary): “The main dilemma is where to go next. Based on one of the two versions I would have to keep going this way, and in this case I would reach the Northerly edge of cyclone with its 45-50 knots of wind around the evening. Those conditions would affect us for about 4-5 hours. A rather huge cyclone is being formed; its center is about 250 miles below me and it’s moving very fast to the E–SE. In its Easterly wing there are serious 50+ winds. If I follow the second version I would have to gybe right now and go 80 miles towards the East. Even then, the edge of it would reach me but I would have to stay inside for a shorter time, and we wouldn’t be as close to the front. I chose the second version. I gybed and headed towards East for a little while. I don’t want to risk my boat in conditions that are possible to avoid. At the moment we are slightly slower than the routing but in the given situations this could even come in handy later on.” 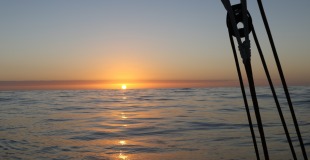 From calms to storms 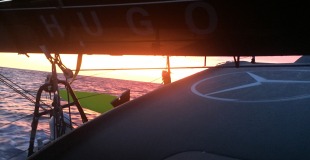 A slow climb back up the Atlantic 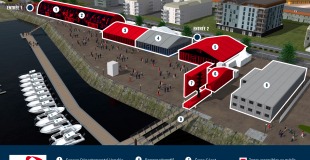