There are several weather hurdles before the finish for Hugo Boss and Banque Populaire VIII. 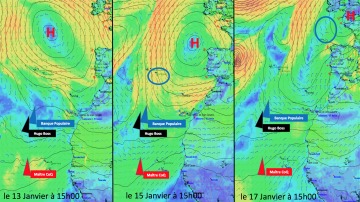 © Great CircleThe route to Les Sables d'Olonne is still full of hurdles. The first one is the zone of light winds which Banque Populaire entered this morning followed by Hugo Boss this afternoon. Winds are going to remain unstable during the next 48 hours. They should then find a steady soutehrly flow up to the west of Brittany. The wind will be strong, but rather stable, which should allow them to maintain high average speeds.

From January 17th in the evening, they will have to deal with the high pressure system the position of which is not still certain. If it is situated to the north of France, it could extend with a ridge (blue zone with light winds). Both leaders will have to cross this zone as best they can, probably off Brittany before ending upwind with easterly winds and very cold temperatures. It is likely that they will come close to the Breton coast before crossing the finishing line in Les Sables d'Olonne.

For Jérémie Beyou and Jean Pierre Dick, it is still a little early to know what might happen before their arrival, but we already know that they will also have to deal with several weather systems with each time the risk of seeing the chasing boats get closer. That is especially true for StMichel Virbac who only has a 120 mile lead over Quéguiner and Finistère Mer Vent.