Hungary may be landlocked but the same certainly cannot be said of its inhabitants. Indeed, Nándor Fa (Spirit of Hungary) has safely negotiated his way around all three of the capes that make up the Vendée Globe solo non-stop, unassisted, round the world yacht race course and is currently about 2,000nm south of the equator positioned in a solid 8th place a little over 5,000 miles from the race finish, snaking his way up through the weather systems colouring the South Atlantic. He gives us the low-down on the current state of play.

“I wanted to write down everything immediately, but it was impossible to hit the right keys, given the circumstances. I could have banged my head against the whole chart table as it was. I had horrible conditions as I was forced to sail almost against the high seas that were generated by the 60-knot wind blowing from the North. We were lucky as we could have been torn apart otherwise. The wind I am in already rose to 45 instead of 26 knots and immediately caused the waves to build. Even larger seas are coming across them and the interference is so rough it makes the area impassable. I cannot move around inside the boat because if I let go of the thing I’m holding onto I will surely get smashed into something. I wanted to make some dinner but I just can’t stay put in front of the galley. I crawl to the beanbag somehow, wearing my drysuit, and lay down to have some rest like that, soaking wet. I can’t sleep, it is impossible but I feel numb with fatigue and I’m shivering more and more. I’m wet, exhausted and it’s getting colder again. I take an effort to climb out and pull up the hydro-generator, then I change my shirt which takes 10 minutes. I am not even able to release the handrail for several minutes, not that I would be able to change my clothes as I’d wish to.

It took forever for dawn to break and I wasn’t sure we’d survive it in one piece. At times, we were caught in such enormous breaking waves, they simply grabbed the boat and threw her 20 – 30 metres away, where it felt like we’d landed on concrete. The boat is creaking and crackling, water flooding across everything. 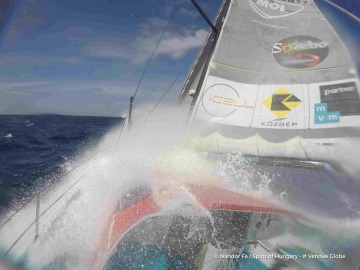 Sometime, somehow, I fell asleep. I was awakened by the sunlight coming in through the window and the relative silence. I looked at the instruments, 35 knots of wind was blowing, boat speed at 13, almost at peace. What a contrast! Everything outside was white with all the frothing but even so, a new kind of system among the waves had developed and they were running almost together with the wind. I unreefed the third line.

As soon as I was done with winching I wanted to go inside but I couldn’t. Grabbing onto the pedestal’s handrails, I kept staring at the ocean mesmerised. What a world this is, where pure power and energy rules, giving no mercy to anybody. Bigger waves insensitively overhaul smaller ones as if they weren’t even there, and continue to bring their power forward indefatigably. I want to get out of here – is my only thought, but at the same time I’m deeply impressed by the view and the feelings that swell up in me under such circumstances. These are feelings that can’t be put into words, it is a kind of mixture of last night and this morning. I want to be anywhere but here! I can’t move away from the pedestal… I’m just standing watching this incredible demonstration of power.

Last night, as rain was shifted by heavy showers and vice-versa, I was sitting outside in the cockpit tidying up the sheets, when a huge bolt of lightning struck down into the darkness, coinciding with an enormous deafening crash. My first thought was that we are the ones that got struck, I could smell the scent of discharge. I quickly looked at the instruments, they were working. Before and after there was nothing, this was the only lightning bolt. It had come to take a close look at me but fortunately I was given some clemency this time. 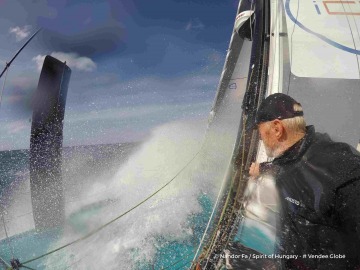 Everything hurts! This is not the kind of pain that comes from being old, this is muscle pain from the top of my head to the end of my toes. The skin hurts on my hand… well only where I still have it. Mostly it’s replaced by plasters.

I got a message from Conrad, he congratulated me on coming out of the storm. He believes I have green lights to progress north now. Be a prophet my friend! I really want that to be true. I also congratulated him when he rounded Cape Horn for the third time.

It is the morning, the sun is shining, we’re surfing on a 6-7-metre swell. At the bottom of the slopes we’re awaited by the guaranteed slams, which are inescapable.

The base wind is 30 – 34 knots. I decided to shake out a reef. In reaching conditions it works in the following way: I start releasing the reefing line slowly in little doses with the help of a winch, while at the same time on another winch I pull the halyard in at the same rhythm so that the battens won’t be strained. I don’t like to force these things.  When we’re on our way up a swell, the burden is much greater on the mainsail so I ease it until we start speeding down the hill and the sail becomes lighter. I carefully study the waves, figuring out the law among them. The dominant wave direction for us is a reaching direction right now, which carries us along nicely, but occasionally there are smaller waves that confuse the main stream and punch at us.

I was sitting outside, wondering. Somewhere very far from us, there is an ongoing fusion inside the sun that radiates and arrives with us in the form of sunlight. It makes us warm, causing warm masses of air to move upwards because new masses are constantly trying to take their place – this phenomenon is called wind. Wind, that generates waves, which then run forward to transmit energy and form the geography of our globe. They build or destroy, whichever they want. And here we are, travelling with the wind as an intermediary of power, bumping our way through the vast energy-traffic system.

Perhaps the endless wearing of the drysuit might be over soon. I put it on five weeks ago and ever since, I’ve only taken it off for a few very short minutes. This is something that only those who’ve done it can understand: to live wrapped up the whole time.

Yesterday when I was already fighting with the motion, the GPS signal went off again. I couldn’t see myself on the chart, I couldn’t see where I was going. I waited a little bit but I didn’t come back. I started to go through all the solutions I usually do to get it back, but nothing worked. I’d already restarted the Adrena, the computer, the AIS, still nothing. Next step is calling Peter. But these things always happen when it night-time at home and I barely dared to actually call him. On the other hand, the problem must be solved because I am sailing blind this way. So I called him, I think I already know his sleepy voice better than his wife. We consulted several times; he wrote me letters on what to do and I followed his instructions. And again, and again. Finally, the little boat shape appeared on the chart. Such an amazingly happy feeling that this tiny boat-shaped dot can cause! The worse the conditions and the bigger the problems, the happier you can be when you’ve managed to solve them!