Home News Throttles down in sprint to Vendée Globe finish

Throttles down in sprint to Vendée Globe finish

The race to the Vendée Globe finish line today became an all-out, neck-and-neck sprint as the leading pair's speedos rocketed into the 20s.

After several days of slow progress north in light winds, Armel Le Cléac'h and Alex Thomson were today blasting towards the home straight of the solo round the world race in winds of up to 30 knots.

The skippers, split by just 95 nautical miles, were eating up the 1,300nm standing between them and the finish line in Les Sables d'Olonne, France, as they try to squeeze every last bit of speed from their foiling IMOCA 60 raceboats.

At the 1400 UTC position update British skipper Thomson, who led the race through most of its early stages, had a narrow speed advantage as he hurtled north on Hugo Boss at 24 knots. French skipper Le Cléac'h, who has topped the rankings since December 2, was more than two knots slower as he closed in on the Azores. With the ETA in Les Sables currently Thursday, the Vendée Globe is shaping up to go right down to the wire.

“We have 17 to 20 knots of breeze at the moment and not very nice seas to be honest with the waves coming in from the east,” Thomson told Vendée Globe HQ in Les Sables today. “It’s difficult to go fast but I’m not complaining because I am making good speed. It’s going to get windy in the next 24 hours, up to 30 knots. We'll be going fast, and we'll have to see how things pan out.”

Thomson is competing in the Vendée Globe for the fourth time and is aiming to become the first Briton ever to win the race in its 27-year history. If he can continue to eat into Le Cléac'h's lead there is a chance he could realise his goal. Le Cléac'h, meanwhile, is hell-bent on ensuring he scores his first ever Vendée Globe win after posting runner's-up finishes in the past two editions.

The anticyclone currently blocking the duo's path to Les Sables is moving towards the English Channel and in another 36 hours the pair will be able to point their bows towards the finish line for an upwind drag race to glory.

Some 6,000nm behind the leaders the quartet of Fabrice Amedeo, Arnaud Boissières, Alan Roura and Rich Wilson from 11th to 14th were fighting a battle against Mother Nature as they approached Cape Horn, the southernmost tip of South America. North-westerly breeze of up to 40 knots was making for a testing passage past the legendary milestone, not only battering the boats but whipping up seas of up to six metres high.

Amedeo, a sports journalist-turned-solo sailor, said his primary focus was to preserve man and boat in order to keep his dream alive of finishing the Vendée Globe. “It's an amazing moment for me because it's my first rounding of Cape Horn, and it comes after one month in the south,” he said. “But because of the wind I feel a little bit stressed and it hasn't quite sunk in that I will round Cape Horn in a few hours. I'm very concentrated now but I will feel better in two days – then it will feel like a victory. I'll have a lot of wind today and tomorrow so my psychological Cape Horn will be tomorrow evening.”

The enormity of the task at hand is not lost on Swiss sailor Alan Roura, who at 23 is the race's youngest skipper. “It’s my first Cape Horn and it’s no holiday that’s for sure,” he said. “It’ll be a big, big relief to round it as it’s a key passage and marks our return home. I hope we’ll have milder conditions in the Atlantic.”

Log on to vendeeglobe.org at 1200 UTC tomorrow for the Vendée Live show, with all the latest news from the racecourse. 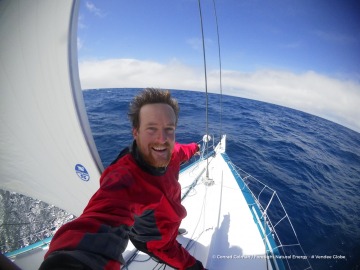 Conrad Colman (Foresight Natural Energy): “Entering the "Roaring Forties", the band of latitude between 40 and 50 degrees south, is always a great moment. When going down the South Atlantic it means the beginning of the south, the long swells, the grey days and the start of the strong winds that roar, hence the name. Entering this band going back up again means an escape from all that and the promise of calmer days and the opportunity to untangle the nerves that were wound tight by weeks of stress. Even now at 48 degrees north, the constant dampness of condensation inside the boat is drying out with the rising temperatures and I am blessed with bright sunshine, puffy white clouds dancing in blue skies. Eric has had a dream run since the Horn, with one tack taking him straight up the direct route home whereas conditions just a few hours behind have meant that I have sailed more miles with more manoeuvres in order to find the wind I need to maximise my limited sail wardrobe. I am currently in stable running conditions in up to 30 knots of wind and am making great progress. All that is set to change however as today the wind will come more from the north and I will start a long upwind march that will have the boat banging into the crests of the waves, instead of sliding over them downwind, until I get up to the level of Rio. This is one of the least interesting parts of the race as it's just one long port tack towards the north east on boats that are optimised for running and reaching, not hundreds of miles of upwind! Still, if that's the price for thousands of miles downwind I'll take it but first I need to find my earplugs!” 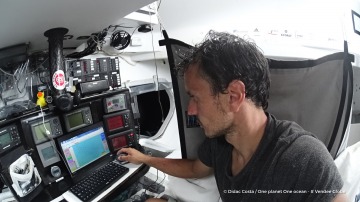 Didac Costa (One Planet One Ocean): “Yesterday I launched the two Argos beacons I had on-board. Over the coming months they will drift through the Pacific at the mercy of the currents providing valuable information to scientists about the dynamics of the oceans. The most elongated of the beacons is a prototype that feeds on the kinetic energy generated by the motion of the waves. Another of the four oceanographic studies I’m doing in this Vendée Globe is the project Citclops-Eyeonwater. Through an application on a mobile I take a daily picture of the surface of the sea. As the colour of the sea is determined in part by the presence of phytoplankton, scientists can measure the quality of the marine environment via these photos. This phone also has an unplanned dual-purpose now too as I ran out of batteries for the headtorch (the Tupperware container where I kept them got wet when I had the incident at the start and most of them are unusable) so I use the phone as a light whenever I can. It won’t illuminate the mast, but it helps me when I am on deck or doing things inside the boat. The rechargeable handset stopped charging a few days ago, so I do everything I can with the phone to keep the few batteries I have left for when they are really needed.
The wind shifted a few hours ago and I now have a very cold S’ly wind. I have all my possible layers on. If all goes well I could reach Cape Horn next weekend. There are still more than 1,500 miles to go, but the Cape, for all that it stands for, is already part of my thoughts…”