349 mile away from the finish line, and with a 4 NM gap between the three leaders, this last sprint towards the Sables d’Olonne bespeaks a breath-taking suspense. Who, amongst the Australian Mangina – PYR, the New-Zealander NZ-Eligo « IST » and the French Didflam will have the last word? The strategy will certainly come down a speed race because the two first skippers are currently one behind the other.

Didflam’s southbound slight shift may be the solution to take the lead but the answer will definitely come at the moment of the weather transition within 20 hours. Anticipating it well will guarantee the success. If, at the time being, the skippers are at broad reach, they will have to end up this circumnavigation close hauled. 27 miles adrift, the Swiss Liryc82 is 4th ahead of the German Raumzeit, 5th. This very international Top 5 proves one more time that this virtual race around the world does not know any borders. See you tomorrow at noon for the last miles of this epic sailing.

A bit further away than the Virtual Vendée Globe leaders, the Atlantic Sprint first sailors are currently 586 NM away from the finish line. As for the around the world game, four nationalities are fighting for the top position. Koenigswelle (GER), Sail36 (USA), Krokus72 (CH), Tipapacheri (CH) and HRobert23 (FRA) are less than 50 NM apart with very different routes: one is in the South of the High, another one in its centre and finally there is a group in the North running before the wind. We’ll have to wait 24 hours still to get a better vision of the good strategy.

How to validate the arrival in les Sables d’Olonne? This question is starting to be raised on the VR News messages. As the picture shows, the arrival is not materialised by a line but by a circle into which you just have to enter. Once inside the circle, the Virtual Vendée Globe and your rank will be validated. 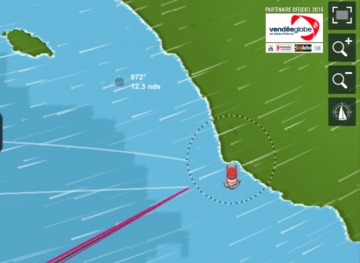 Ahoy! It seems the end is approaching… And as I’m going to overtake you by the West as soon as I will get the forecast 31 knots of wind in the middle of the Azores and further, it seems I have already to congratulate you for this Virtual Vendée Globe very successful edition! It’s been a pleasure and will still be much more during the next three days that I will use at the maximum to catch up, I hope up to 5,000th. The western option finally pays off and, given the wind I’ll get and the record of the distance sailed in 24 hours, which I’m about to blow up, it’s not about to stop. Best wishes for the fierce end of the race to the 450,000 virtual sailors. See you in 4 years time! Quentin

Thanks to your team; you really have built an exceptional game interface. Pity for the options! Regards

Hello, what shall we do to be qualified as arrived? Do we have to cross a line or touch a buoy? Thanks

Hello. When seeing my house on the horizon of the San Miguel Island in the Azores, I had the nice surprise to read on the VG internet page an extract of « Bad weather on the archipelago », the Vitorino Nemesio’s book, which is one of the most important book about the Azores. Thank you

I just finally understood the Polar diagrams system! Which shows than one can learn at any age! As far the water above the ankles, it’s complicated! papamath 62990

The end is getting closer and the goals are almost reached: sail around the world in less than 80 days and be amongst the 10% firsts of the ranking @ VR. YEAH!! 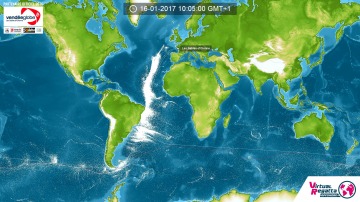