In 2012, Lilian Launay had sailed the distance in 74 days, 16 hours and 59 minutes. In second spot, the New Zealander NZ-Eligo’’IST’’, Derek Watt under his true name, hasn’t given up anything, but has unfortunately not managed to overtake his rival. 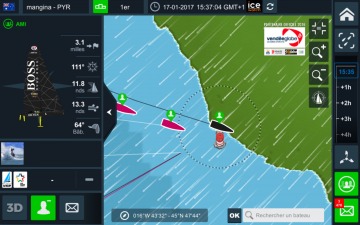 He finishes up at less than 3 miles from Mangina-PYR. In third spot, Didflam, Didier Flament has tried till the end to fiddle the missing few miles to the first spot, but unsuccessfully. He finishes 13 miles behind the winner.

This wonderful victory of a sailor from down under is a landmark in the history of the game that hasn’t stopped to push back the borders.

With 199 represented countries in this Virtual Vendée Globe, from which 3 are in the 3 first spots, this ultimate e-adventure reaches sailors from every horizons. Congratulations to Matt Johnson for this beautiful victory under Alex Thomson’s Hugo Boss boat’s colours. 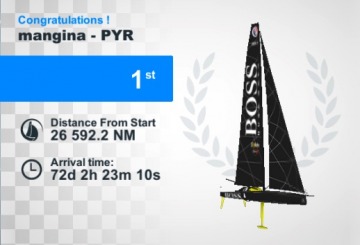