By crossing the Virtual Vendée Globe finish line on Wednesday January, 18th, the boat « les insupportables » (« the unbearables »), of Vouvray Sainte Thérèse secondary school's 7th graders', ranks 140th on 453,000 registered players. This is an extraordinary performance for this crew led by Sophie Angelopoulos.

« The Virtual Vendée Globe project proposed by the Virtual Academy is a wonderful project that I’ve shared my 7th graders’ class. Doing the race with a secondary school class has not been simple, because I wasn’t with my pupils all the time. We have had to adapt our way of playing. For the record, we’ve rounded Cape Horn on December 25th at Midnight (00:00); it has been a rather cute coincidence. We’ve set up this circumnavigation around an educational project with French language, Maths, Geography and Sciences. We logged in in average 4 times a week and for the rest of the time, I was doing it from home. Although we’ve already arrived a week ago now, the project is not finished yet. We have also begun to write a logbook. This will bring us roughly until the month of May. We’re really delighted to finish the Virtual Vendée Globe at the schools’ top position; they even spoke about us in the Vendée Théma. It’s a nice success and since, we have had quite a lot of interviews with France Bleu Touraine and also with La Nouvelle République. This adventure around the world has brought the pupils together and they all have been very proud of the race’s finish. 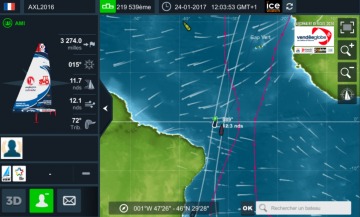 Meanwhile, thousands of virtual boats are still sailing towards les Sables D’Olonne. 50,000 virtual IMOCAS are already safely berthed. There are 165,000 virtual boats in the Northern Atlantic between the finish line and the boat of - Deputy Minister for Innovation and Digital Affairs - Mrs Axelle Lemaire, which is just about to cross the Equator under the colours of support to the farmers. The weather forecast for the next days is good for practically the whole armada. It’s a godsend for adding miles to the counter and accelerating towards Les Sables d’Olonne. Have a nice Tuesday on the water and see you very soon for some more news.

The VRNews boat, which arrived 16,662nd at les Sables d’Olonne is still staying tuned, so please, do not hesitate to leave a message. As we already have told, the huge success of the boat does not allow us to answer all your questions. As news go by, we’ll bring you some solutions, advises, answers, and all this kind of things…