Louis Burton has started his final sprint to Les Sables d’Olonne hopping onto a deep Atlantic low SW of the Azores. Sébastien Destremau is now just 650 miles from the Horn that he is due to round late this weekend…

After two gybes during the night, Louis Burton can now look forward to arriving back in Les Sables d’Olonne in the middle of next week, as this low that he caught after a tricky climb up from the Equator will push him along in 20-30 knots of wind from the SW. The skipper of Bureau Vallée will be able to head straight for Les Sables d’Olonne probably going between the islands of Faïal and Florès before passing close to Cape Finisterre, where conditions are expected to be quite rough.

Just under 6000 miles to his south, Sébastien Destremau is going to have to pay attention to a Southern low, which is catching him and will affect him this weekend as he approaches Drake Passage. Winds in excess of forty knots are forecast along the edge of the Andes and the skipper of Technofirst-FaceOcean will have to be very cautious today in the heavy seas. These violent conditions should only last 24 hours and on Sunday, a twenty-knot breeze will be blowing at the Horn. 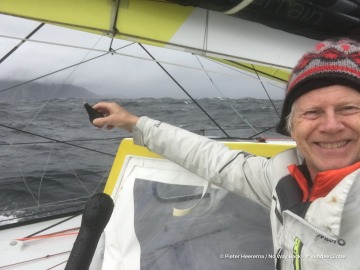 © Pieter Heerema/ Vendée GlobeEast of the Falklands, Pieter Heerema (No Way Back) is taking advantage of a strong NW’ly air stream to sail along the edge of the Atlantic exclusion zone to head back up to Cape Frio behind Didac Costa (One Planet-One Ocean) and Romain Attanasio (Famille Mary-Étamine du Lys) , who is just thirty miles behind the Catalan sailor. A very similar battle to the one between Fabrice Amedeo (Newrest-Matmut) and Arnaud Boissières (La Mie Câline) on the edge of the St. Helena high. But they need to keep an eye on the young Swiss sailor Alan Roura (La Fabrique) and the American Rich Wilson (Great America IV) who are well positioned tacking upwind to Cape Frio. 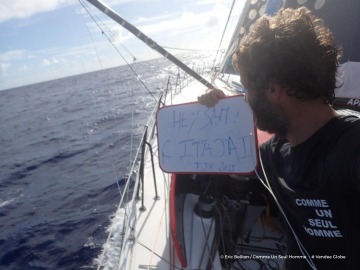 Eric Bellion (CommeUnSeulHomme) is maintaining his lead over Conrad Colman (Foresight Natural Energy). Today he is at the latitude of Recife where the easterly trade winds remain light. 500 miles from the Equator, it is not looking like a good idea to head eastwards, as the Doldrums are fairly active, while further north the trade winds are well established for Nándor Fa (Spirit of Hungary) who has accelerated as he goes around the Azores high before heading down to Vendée, like his predecessor, Louis Burton… 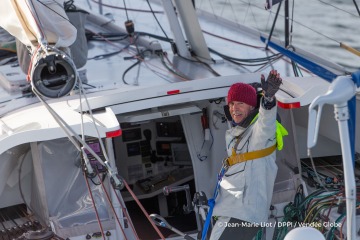 Rich Wilson (Great American IV): “We’re about 900 miles east northeast of Buenos Aires, so we’re making slow progress north. We are trapped in a big depression, yet again. We keep finding the 35 knot, upwind parts of the South Atlantic. We bailed out last night into the center of it. It was a little dramatic last night, just to take evasive action. It was really because we were going upwind into seas and the boat was taking such a beating. We primarily wanted to protect the boat, which we did, and also, due to the violent motion of the boat, to not get hurt. We have a few new noises that I’ve learned to recognize. There’s a noise back in the lazarette, when the hydraulic ram for the autopilot starts to move a little bit on its pivot point, which needs to be snugged up with a wrench. Just a quarter turn on a little locking screw, and since I know what that sounds like, now, I can go back there and snug it up again. And the sound goes away.”

Azores high for Bureau Vallée and heavy weather for TechnoFirst-faceOcean

And then there were twelve