All the skippers have good weather conditions today. The next three competitors expected in Les Sables d'Olonne should have much better conditions than Eric Bellion had during the last four days. 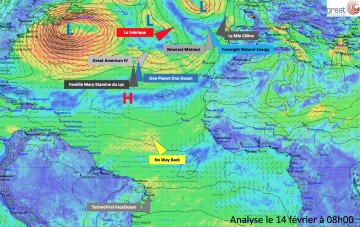 © Great CircleThe next 3 competitors expected in Les Sables d'Olonne are at present off Spain and Portugal in a southerly wind flow which is tendong to decrease. The conditions are perfect for Conrad Colman who should be sailing downwind as soon as his jury rig is operational.

For Alan Roura, the wind is light in the south of a small area of low pressure which is not very active. Rich Wilson, Didac Costa and Romain Attanasio are going to sail between the big depression which is moving in from Newfoundland and the anticyclone (H). They can decide how much they want in terms of wind speed.

Pieter Heerema and Sébastien Destremau are still in the trade winds.