The dawn of the final day.  Your final moments alone with your boat, a demanding companion, who has been the focus of attention and with whom you have shared all these experiences at sea. She has taken you around the world: a capsule, which enabled you to see some faraway places. The outcome is now decided and you can get on better with her now. But you can still remember those moments, when everything was going wrong, when you insulted her and hit her, as if this hi-tech carbon beast was to blame. To apologis, just as you are about to leave each other, you slap her on the shoulder like a friend. “Hello there, dear boat. Thanks for allowing me to go through this great adventure.” She was able in spite of everything to take you around the world, like a capsule in orbit around the Earth that you can watch from afar.

The first boat approaches.  They must have set out early from les Sables, in spite of the waves and sea conditions and seasickness.  You wave, shout to each other a few polite words.  Then there is silence.  Respectful silence from all those aboard, who are staring at you and can finally see for themselves what they imagined from your words, and photos and your trace on the charts.

You don’t feel like talking yet.  It will take time to get out of this cocoon of solitude.  So many things to say and so many others that cannot be explained.  You watch each other like spectators, unable to grasp what is happening. They keep watching and appear worried wanting to know whether this extraordinary experience has changed you.  Other boats draw near.  More greetings.  Yes, all is well.  I’m back with you.  Just leave me the time to step ashore.  The coast appears out of the mist. You had a picture on your mind for three months and now the voyage is coming to an end.  Soon, the boat will be stationary like an inert object.  The sound of the water will be replaced by the sounds found ashore.  From being a sea creature, you once again return to being a land creature.

Over the final miles, you re-experience three months at sea, as if there was on one side an open infinite space and on the other the confined conditions on land.  A film shown again with flashback imagery.  The albatross a few days after Cape Horn.  Intuitively, you knew it would be the last.  He accompanied you northwards towards warmer climes. One morning he circled around the mast and you just knew he was about to go.  You waved as if saying farewell to that world.  A wild world, where you discovered yourself and the difficulties and need to surpass yourself day after day and week after week.  Her giant wings became yours. You have succeeded in your challenge. You can be proud and happy. Fell confident and head for other dreams.

There is the sheer pleasure of getting back with your friends and family. People you wrote to saying things you would not normally express face to face. You’re never closer than when you’re far apart. Time to leave the boat. Your faithful old friend. You head up the pontoon. Your legs feel stiff. You’re unsteady on your feet – land-sickness. All these people are here just for you. Into the crowds with hands going out and cheers, while journalists ask questions. You go straight from being alone to be in a world of others.

The body has to cope with this sudden change. Going from a quiet life on the water, where the risk of infection was practically non-existent, it now has to respond to the onslaught of bacteria and viruses which proliferate ashore. Not easy for the immune system. Your white blood cells and antibodies have had nothing to do for months and have been on holiday. Now they have to get back in action. But the attackers have surprised the system. It is no surprise that a few days later, the skippers start to experience infections, particularly in their respiratory system.

It’s a long night and you don’t feel like sleeping. Your friends got a bit tired waiting. Then there was their trip out in a motor boat and all the emotion. It is late now. You managed to grab a few minutes to doze. Just enough to get back in shape. That is what it has been like for two months. Short naps, which are perfectly suited to the demands of solo ocean racing. Today, you have to change all that to get back into a normal sleep pattern in the evening. It will take time, sometimes several weeks and nights of insomnia.

You go outside just to get some air. The cold front has taken all the clouds away. The stars are out, but are not as bright as usual, because of the lights of the town. In the southern ocean they dazzled you. That is all in the past now. Just a memory. You seem to be obsessed with that world. For the moment, it’s not a feeling of wanting to go back. In four years you will be older and wiser… or give in to temptation. 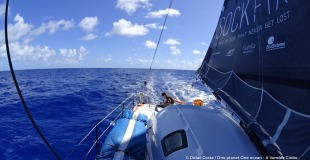 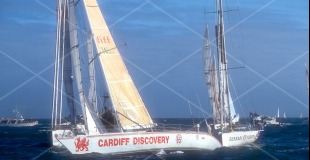 Capsizing in the Southern Ocean 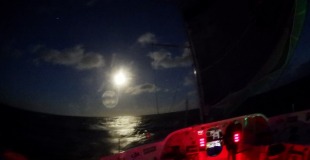 Be yourself, be real