Home News Costa, the cream of Catalonia 160 miles from the finish

Costa, the cream of Catalonia 160 miles from the finish

With 160 miles to the finish of his first Vendée Globe solo round the world race, Catalan skipper Didac Costa is making good speed this morning in a 15kts W'ly wind. He is likely to close Les Sables d'Olonne late this evening but, according to his team, will slow to enjoy his channel welcome tomorrow morning at around 1030hrs UTC.

Costa will become only the second Spanish skipper ever to complete the Vendée Globe after the inspirational achievement of José Luis de Ugarte who went round in 134 days, finishing six days after Nandor Fa in 1993. After completing the Barcelona World Race in fourth place on April 8th 2015, sailing with Aleix Gelabert in 98 days, this will be Costa's second circumnavigation with the legendary boat which started life as Ellen MacArthur's Kingfisher.

Conrad Colman is still holding 15th place on the race course although it is hard to see him not lose out also to Romain Attanasio as the courageous Kiwi still has only light winds today. But the skipper of the jury rigged Foresight Natural Energy now has about 250 miles to the finish line and we can start to see an ETA between Friday and Saturday. He will have these same light airs for the rest of the day today but in the night, between late evening and around 0100hrs the breeze backs all the eay around from the NE'ly which is giving Colman the light upwind conditions, to W'ly direction which will give him a much more effective push towards the French coast. This will build to 15-20kts before rotating more towards the NW which, judging by the upwind angles he has managed, should still be moderately quick through Friday. 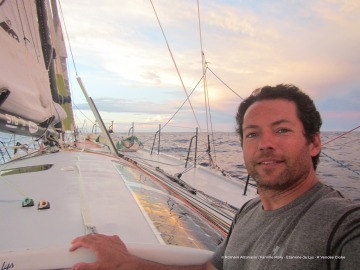 Romain Attansio (Famille Mary-Etamine Du Lys) now has a straight line course in to the finish line and could cross the finish line around 0600hrs Friday morning though may wait for more daylight. Pieter Heerema (No Way Back) is in S'ly winds close to the west of the Azores. He will still have to work quite north on his route to get around the high, but then has two low pressures coming in one after the other which will see him in breezy conditions over the weekend - up to 35kts - but he should finish Monday morning. Seb Destremau is now into the well established 15kt NE'ly tradewinds, crashing upwind he will be looking after his boat and himself over the coming days in this relentless regime.