Friday finish for Attanasio and Colman

Colman has been polled during the night at well over eight knots in a 15-20kts NW'ly breeze and was doing a great job of trying to stay ahead of Attanasio. The French skipper took over 15th place this morning with around 40 miles to his finish. He is due on the finish line some time around 1000hrs local time this morning.

Colman, meantime, looks set to finish this afternoon. He has had a great final night, clearly the wounded Kiwi lion at his most motivated to get the job done and across the line. The breeze will remain at 15kts or a little more for the remainder of the afternoon perhaps dropping slightly after 1500hrs. Colman will be the first skipper in the history of the race to finish under such a jury rig. In fact Philippe Poupon dismasted at 30 miles from the finish at the end of the second edition but he only lost his mizzen mast which he had to cut free. Yves Parlier famously repaired his mast at Stewart Island and finished in 126 days, eating only algae and seaweed during the last days of his race. 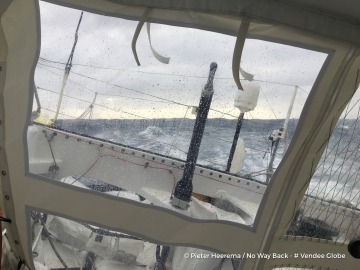 The final miles from the Azores look increasingly complicated and frustrating for the Dutch soloist Pieter Heerema on No Way Back. He has two successive low pressures in his path, the second with winds to 45kts and big, confused seas. The safest option seems to be to slow for some 48 hours or more to miss them but his frustration is then only likely to be heightened by a high pressure situation which develops after the second low. Life is a little more straightforward for Sébastien Destremau who is at the latitude of the Cape Verde Islands.