Home News A race against the clock for Pieter Heerema

A race against the clock for Pieter Heerema

Dutch skipper is keeping his foot down to be able to finish in Les Sables d'Olonne this evening. In the 1400hrs rankings, the Dutch sailor was only a hundred miles from the finish and sailing at 15 knots. The clock is ticking, as Heerema cannot enter the harbour after 2115hrs...500 miles SW of the Azores, Sébastien Destremau has at least a week of sailing before he reaches Les Sables d’Olonne to close the eighth Vendée Globe.

Pieter Heerema (No Way Back) has been pushing hard to be able to enter the harbour this evening. If he does not arrive on time, he will have to wait until tomorrow morning to moor up his boat at the Vendée Globe pontoon. 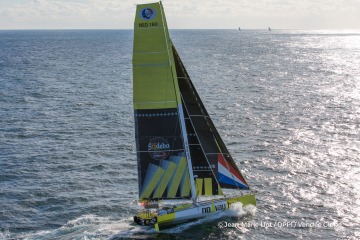 Heerema gybed at 1730hrs yesterday afternoon just five miles from the coast of Galicia. Since then, he has been heading towards the NE in light winds blowing at 8-9 knots, which means he has been slowed. Early this afternoon, he should be able to pick up an ESE’ly wind allowing him to accelerate and complete his round the world voyage in just over 116 days.

Sébastien Destremau hoping for a better catch
Sébastien Destremau (TechnoFirst-faceOcean) is sailing upwind in a fairly strong NNE’ly wind (20-25 knots). He should remain in this air stream until tonight, before the wind eases. He may then get his fishing gear out again hoping for a better catch than in his recent videos. Sébastien is having to ration his food and any extra food would be highly appreciated. He is still 1700 miles from Les Sables d’Olonne and he is still expected to finish around 9th-10th March after around 125 days at sea.