Will Pieter Heerema (No Way Back) make it into the harbour this evening? For the moment, it is difficult to say, but the Dutch skipper has put his foot down to avoid spending another night at sea. At 1730hrs UTC, he only had 52 miles to go to Les Sables d’Olonne and was making fifteen knots. If he keeps up this pace, he can hope to get there in time. But if he slows down, he will have to wait until tomorrow morning to make his way into the famous harbour entrance channel and be greeted by the public.

Whatever happens, Heerema will take seventeenth place after 116 days at sea. He will be the first Dutchman to complete the Vendée Globe. He will also be the second oldest skipper in the history of the race after Rich Wilson, 66, who finished thirteenth in this edition). A fine performance, aboard a technically and physically demanding new generation IMOCA.

After he finishes, there will only be one competitor left in the 8th Vendée Globe: Sébastien Destremau (TechnoFirst-faceOcean), who is expected in Les Sables around 10th March. 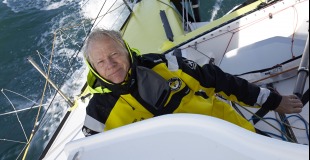 A race against the clock for Pieter Heerema