> News > Alan Roura looks back at his Vendée Globe

Before the start, you worried about not having enough time to prepare finding your budget just in time for the start… In the end, you didn’t have too much to work on?

No, the boat was ready, and although my preparation was short, we got a lot done. I think that in eleven months, my little team, who just kept hard at it, did around two years of work. The fact that I was always there in the yard and during the preparation helped me identify what needed to be done first. I was happy enough with the reliability of the boat. In the end, it was more in myself that I was lacking confidence…

Is that why the start was so emotional? 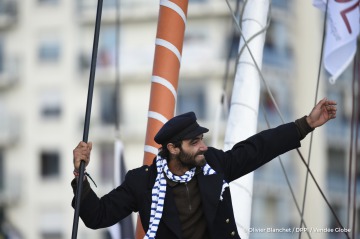 Yes, partly… After my Mini Transat where I surprised everyone coming eleventh in the prototypes aboard a boat from 1994, the Route du Rhum and the Transat Jacques Vabre were complicated. I needed to find the Alan, who never gave up and saw things through. The start from Les Sables d’Olonne was very emotional, as it was already a victory to be there alongside such great sailors… It was an honour and I needed to show that I was up to it. It’s not just the start, but you need to prove you have the right to be there. As soon as the race got underway, I went for it. It was only on the following day that I really thought about it, all those faces going through my head. I did a lot of crying in the first five days. It’s something you have to get over before tackling the round the world voyage itself, especially with a complicated start in the bay of Biscay with all the shipping. I think everyone was emotional, even those, who were setting off for the third time. Going through the entrance channel was more emotional thatn the start itself. It’s symbolic, the whole fleet aiming for the start line, everyone getting so excited throughout the race, that’s something that we feel too.

You had quite a few technical worries, starting with your antenna problem, which hindered you on the way down the Atlantic…

I really screwed up the North Atlantic. When I passed Madeira, I was way out to sea with Eric (Bellion), but I gybed too soon before heading twoards the coast of Brazil after the Cape Verdes (where I wanted to use my phone to download software for my satellite phone to use it as a modem). I found myself 30° away from the route taken by the others, which meant I ahd to sail many more miles, even if I stayed in 25th place. I then chose a southern option and went on the attack, even if Enda (O’Coineen) caught me. After ten days of questioning and wondering whether it would work, whether I would find myself all alone at the rear, or catch those ahead. By the Kerguelens I was ahead of Rich (Wilson) and Eric.

You passed the Cape of Good Hope in 20th place on 6th December, after others dropped out or had technical problems an came out of the Indian in 13th place on 21st having overtaken four boats… 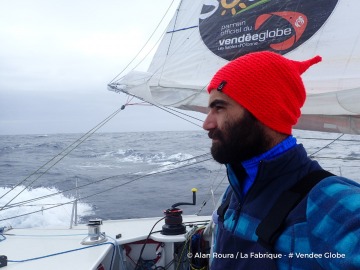 At first, it wasn’t that easy to gain places after others retired. I felt I didn’t deserve that. Then, I understood that is all part of the game. If I hadn’t broken anything, it was because I was looking after my boat, remembering that my main goal was to finish the race. But when Fabrice (Amedeo) had problems with his mainsail and I overtook him, it all clicked. I had spent a month on the water sailing downwind and keeping up the pace. I understood that I could do well and I felt more confident. Even with a very old boat, I wasn’t doing too badly and felt good with the old girl. There were some tough conditions in the Indian, but when I look back they were in fact good, in comparison to what followed, as it was there that I had my best result: 382 miles averaging 16 knots over 24 hours on 8th December.

At Christmas, you ahad to let a nasty storm go by, but that is when you got to your highest position in the race – eleventh.

There was a nasty low just ahead of us and we couldn’t go further south because of the exclusion zone, so we just had to put the brakes on. That is always frustrating when you are supposed to be arcing. On 24th December, Eric told me he was not far away and we got together and were joined the next day by Enda, disguised as Father Christmas in his cockpit. It was a magic moment. I stayed with Eric until the evening of the 26th and when the wind got up, we got moving again. That is when I was faster than Fabrice Amedeo and Cali (Arnaud Boissières) and for a few hours was in eleventh place. Superbigou, built in 2000 in Lesconil was just outside the top ten in the Vendée Globe!

On 2nd January, you had a problem with your rudder 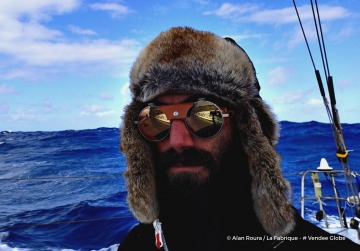 I fell back to thirteenth when Fabrice, Cali overcame their problems. Enda had just dismasted and I was close to Point Nemo, the furthest spot from land. Conrad was knocked down in 70 knots of wind. I can remember telling myself that if I was going to break anything, there was not the right place. That’s when I hit a UFO. Maybe a cetacean or a growler, or something left floating. It was a violent collision and I came to a sudden stop after speeding along at twenty knots. I was inside and rushed outside and saw my starboard rudder floating away. I went below to inspect the damage and saw that water was entering. A real geyser 20 centimetres in diameter. I hove to in order to deal with the ingress, but I couldn’t keep the boat over on her side. I informed my shore team then lowered the mainsail with just the J3 up and the keel to leeward. I sat there in the cockpit thinking for ten minutes. The best solution was to fit my spare rudder. 90 minutes after the collision I had the leak blocked and the rudder in place. After thinking that I was about to lose my boat, I realised I had pulled off something remarkable and that I was able to do something extraordinary like that.

On 16th January, you rounded the Horn, but there was still a long way to go…

One of the highlights of my voyage. I had been dreaming of the Horn for so long. The first land I had seen since Brazil, the end of the Southern Ocean. I passed it under reduced sail, as conditions were very unstable with the wind going from 30 to 55 knots. Because it dropped right off I was able to get closer. It was important for me to see it. You tell yourself that you’re almost there. Turn left and you’re on your way home? But there is still a very long way to go. Light airs, upwind sailing, you’re unable to go where you want and the forecasts were often wrong. It seemed never-ending. That was the hardest part of the race.

On 29th January, your winch came away 3000 miles from the finish. Did you hide any other damage? 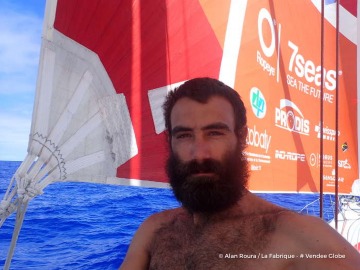 © Alan Roura - La Fabrique / Vendée GlobeA few bits and pieces. They would have told me to stop had they known needed them to think everything was fine so that my team would spur me on. They would be proud of me seeing what I had been through. I didn’t want to give the impression to my rivals that I as weak either. I had to climb the mast about seven times to fix my lazy bag, which kept rubbing against the spreaders. I spent a day without my mainsail being trimmed when the mast track attachment broke and an afternoon when I had to repair a batten. There were also some electronic problems following on from the ingress of water. Early in the race I used the autopilot in fluxgate compass mode, which meant I didn’t have a very straight course. My daggerboard worked loose, so the boat didn’t keep on track upwind. The mast was wobbly… Which wasn’t good for the rigging. I had to be careful with my starboard rudder after I repaired it. I wasn’t sure it would hold out. Then, my winch attachment gave up the ghost. It took me twice as long to do manoeuvres and twice the strain But that’s normal in the Vendée Globe. The thing I hid most was the mast problem. The mainsail battens pierced it off the Kerguelens between two layers of spreaders, in the middle of the mast. That began to lead to a crack on the port side. In a nasty low I eased off for 48 hours. It held out, so after that I forgot it.

Seeing you’re only 24, where do you think you can still progress?

I had one problem that really held me back. Wind mode wasn’t working for more than 20% of the race. I did the rest in compass mode. That really penalised me particularly in the Southern Ocean. But upwind I was at 120% of the boat’s polars, 100% with the wind on the beam, but just 75% downwind. My goal was to complete my first Vendée Globe, so I took it very cautiously. Sometimes I was doing 15, when I could have been doing 22. Being cautious is for me a strength, as you can’t be at 100% all the time. But that’s where I can progress – knowing where to place the cursor. I can also make progress in terms of my weather analysis and strategy. I had 40% of what I needed to know at the start and 80% at the finish. I am self-taught in this field. There are rules and reactions I don’t yet have. Because I was lacking financial support, I didn’t have all the forecasts. I’m lucky that at 24, I still have time to improve.

Were you aware of how much interest you were generating? 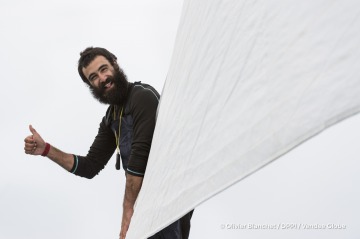 I still don’t! When people stop me in the street, I find that odd. The spotlight wasn’t on me when I set up this project and I never thought so many people would be following me in the race. It was something that always encouraged me – allowing people to dream and get away from their everyday life, from the dull winter and everything going on in the news. I got messages from ashore most days and that helped me during the tricky moments. It really means I want to do it again.

So, you’ll be back in four years from now?

That’s a big yes. I think it is the first time that I have looked so far ahead before a race finishes. I’m currently seeing my present sponsors. La Fabrique and the Un Vendée pour la Suisse association are continuing with me. I’m examining the budgets and looking at various options, but yes, I want to set off again ona  four-year long project aboard a newer boat and with a full programme, including the Route du Rhum, Jacques Vabre and other races, so I can aim for a better result. And who knows maybe even one days win the race? 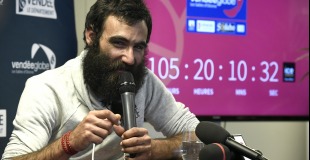 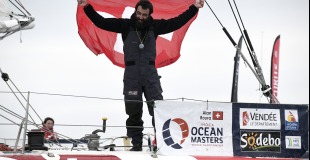