Home News Jean-Pierre Dick back on the attack

He finished in fourth place after his fourth attempt at the Vendée Globe. Having recovered from his extraordinary adventure, Jean-Pierre Dick is back on the attack for a new season aboard StMichel-Virbac, which has been relaunched after two and a half months in the yard. For the major event in the 2017 calendar, the Transat Jacques Vabre, Jean-Pierre will be joined by Yann Eliès and aiming for a fourth victory in this double-handed transatlantic race. Both men fought extremely hard in the last Vendée Globe, finishing just 1 hour and 26 minutes apart, which is the smallest gap in the history of the race…

Jean-Pierre, what was it like getting back to life ashore after your fourth Vendée Globe finished on 25th January?

“Great! The race led to a lot of stress which I needed to deal with. So I took some time off to get back in shape. I also spent some time with my family. Having said that, I was kept busy with the media and sponsors, who always want to catch up with you after the Vendée Globe and it is important for us to be available. That was a major part of my work after the finish. I also had to work out what needed to be done in the yard after the Vendée Globe so that the boat will be perfect for what lies ahead. We have taken up the challenge again this year as our goal is to win the Transat Jacques Vabre. In spite of a packed programme, I now feel that I have recovered and it’s a new chapter for me. In three months you can get back in shape and get things into perspective.” 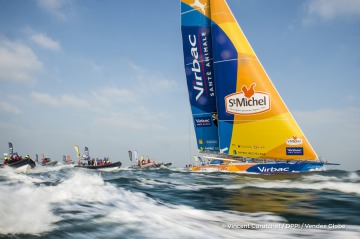 © VINCENT CURUTCHET / DPPI / Vendée GlobeYour IMOCA, StMichel-Virbac, was relaunched on 24th April after two and a half months in the yard. What work was done on her?
“We were very busy. We needed to carry out a thorough check up of the boat. All of the gear was removed, checked and any damaged parts replaced. During the Vendée Globe, we didn’t have any major damage with the structure, hull or appendages. But we needed to check everything and ensure that she was structurally sound. I was pleased with my speed in the Vendée Globe. I made a lot of progress with the final version of the foils, so there aren’t many new features on the boat. The shore team carried out a few minor improvements after my experience in the Vendée Globe. In general, we have tried to lighten her. In the Vendée Globe, taking into account the length of the race, there is a lot of electronics and onboard systems that we don’t need now... We have a great boat to face up to our next challenges.”

“Being up at the front is something I miss”

The big race in 2017 will be the Transat Jacques Vabre (Le Havre-Salvador da Bahia) alongside Yann Eliès. You have already won this double-handed race three times (2003, 2005 and 2011). Are you aiming for a fourth win?

“Yes! It’s important for me, as it’s been a while since I won a race. I particularly enjoy double-handed sailing (Jean-Pierre has won three Transat Jacques Vabre races and two Barcelona World Races). The 2016-2017 Vendée Globe was a success, but I regret losing time early in the race and not being able to be a serious contender for victory. I want to move onto something else and have the chance to be in a winning position. Being up at the front is something I miss.” 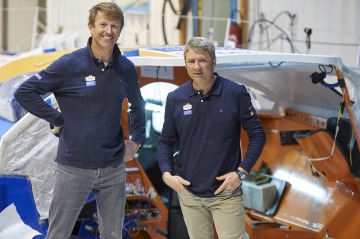 © Y.Zedda/StMichel-VirbacYou’ll be going for your fourth win with Yann Eliès as you co-skipper. Why did you choose him this time?
“Our two backgrounds are complementary. Yann is very talented and has a lot of experience. He is a fighter that I will be able to count on during the race to push the boat hard. We know Yann well, as we set up a project with him and the Absolute Dreamer race team for the 2014 Route du Rhum (aboard the MOD70 Paprec Reyclage). For me, this was the obvious choice. We had a great fight during the Vendée Globe and indeed during the New York-Vendée. So we were close for part of the 2016-2017 season. Now, we’ll be on the same boat, my fantastic StMichel-Virbac.”

What is your programme for the coming weeks?

“I’ll be taking part in the Guyader Grand Prix in Douarnenez this week. This will be the first race of the season. Then, the boat will go to Nice for some PR operations. The delivery trip to the south will be an opportunity to get back out there sailing. Then, StMichel-Virbac will return to her home port of Lorient. This summer we have scheduled a week of training with Yann after he gets back from the Solitaire du Figaro. Then, we’ll compete in the Fastnet Race in August. There will then be a busy preparation phase to be perfectly ready for the start of the Transat Jacques Vabre on 5th November.” 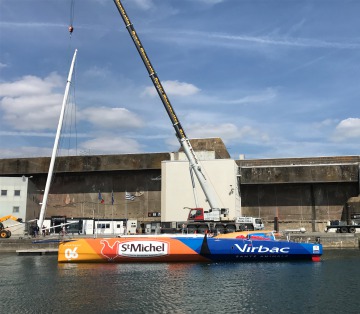 Any ideas about your future and what’s going to happen to your boat after the Transat Jacques Vabre? Could we see you back in the Vendée Globe for a fifth attempt in 2020?
“For the moment, I can’t comment. I need to get back out there racing first to know whether I want to commit myself once again to the Vendée Globe. It’s always an incredible adventure and a breathtaking race. An incredible voyage. The Vendée Globe is never dull. The race requires a huge investment, including before it begins. You need to be really certain if you are ready to take part again…”

The decisions taken by the IMOCA class

The Vendée Globe skippers hosted at the Elysée Palace