Eleventh in the last Vendée Globe, Fabrice Amedeo completed his round the world voyage in 104 days. Three months later, the sailor/journalist has had time to recover from this big adventure and is now looking ahead. On Wednesday 10th May, his monohull was relaunched in Lorient after a post Vendée globe refit. While the boat remains the same, the mane has now changed to Newrest-Brioche Pasquier. Fabrice is now looking forward to a 2017 season with the climax being the Transat Jacques Vabre at the end of the year.

Three months after a highly successful maiden Vendée Globe, Fabrice Amedeo put his IMOCA back in the water on Wednesday in Lorient after a busy refit. The aim was to give the boat back her full potential and ensure her reliability after clocking up a round the world voyage? “We simply inspected everything and repaired what was damaged on board,” explained Fabrice Amedeo. “The rudders, which showed some signs of weakness during the round the world voyage were sent back to the manufacturer, as was the keel ram and the rig, which needed to be inspected. The team then got everything back and refitted it. In general, the boat didn’t suffer much during the Vendée Globe, so no major work was required.” 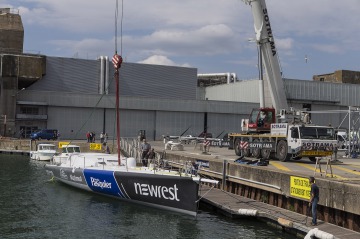 © Jean-Marie Liot / Newrest - Brioche PasquierFabrice and his partners revealed the boat’s new name and their new commitments. While the Newrest Group, which specialises in catering, has remained faithful to the sailor since 2014, they will now be joined by Brioche Pasquier as headline partner. Originally based in the Maine et Loire department (near Cholet), like Fabrice Amedeo, the company wished to step up its commitment after a pleasing start in the Vendée Globe. “It’s hugely pleasing for me to see that all those who were with me in this adventure wish to continue. Indeed the Matmut is continuing to back me,” added Fabrice.

The conclusion of the refit marks the start of a new season, involving getting back in shape on land and a busy schedule for Fabrice Amedeo, who is dividing up his time between Levallois-Perret (near Paris) and La Trinité-sur-Mer (Brittany). “Since the end of the Vendée Globe, it’s been pretty hectic. I got back in touch with my partners, who wanted me to share the adventure with them. I started work on my first book, inspired by my circumnavigation, which is due to come out late this summer and will be published by Glénat. I also spent some time with the family, doing some physical training again and preparing for what lies ahead.”

The Transat Jacques Vabre as the climax in 2017 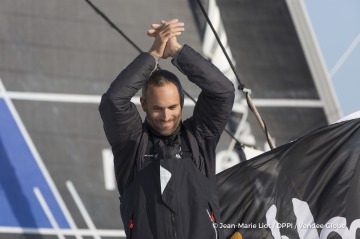 Now it stuime to get back out there sailing and training for the season, with a schedule including the ArMen Race in La Trinité-sur-Mer, Newrest-Brioche Pasquier’s home port and Amedeo will of course also be taking part in the Transat Jacques Vabre, which starts from Le Havre on 5th November with the finish in Salvador da Bahia in Brazil. A double-handed race which Amedeo will compete in alongside a sailor, whose name will be announced shortly. His goal is very clear. “I made a lot of progress in my first Vendée Globe and my goal is to build on what I learnt in this transatlantic race with an experienced co-skipper. I know that I have a lot of work to do and have to keep on learning. At the same time, I’ll be making sure I share all that as much as possible with everyone ashore.”