Having recently bought Bertrand de Broc’s former MACSF, Alan Roura has now revealed the name of the sailor with whom he will compete in the next Transat Jacques Vabre. It will be Frédéric Denis, winner of the last edition of the Mini Transat. Aboard La Fabrique II (a Finot-Conq design from 2007), the two men will be aiming for the podium in the unofficial non-foiler category.

The Transat Jacques Vabre will start on 5th November from Le Havre. For this double-handed race to Salvador da Bahia in Brazil, Alan Roura has chosen Frédéric Denis, a former Mini racer, who has obtained some excellent results, firstly on his Mini 6.50 with a lot of podium places and a win in the 2015 Mini Transat. Fred Denis has also excelled on multihulls having won the 2017 Armen Race in the Multi2000 category and the 2017 Round Belle-Ile race on a Multi50. Before that, he was French J80 champion in 2007 and won three university sailing titles (2008, 2009 and 2010). Used to a wide range of boats, he also took part three times in the J22 world championships from 2003 to 2005, two Tour de France sailing races, and has also sailed Dragons and was boat captain and crewman on the Sodebo Ultim maxi-trimaran before joining Vincent Riou’s PTB team as engineer for the last Vendée Globe.

A strong all-rounder that suits what Alan has been looking for. “I wanted someone, who could bring me something extra in terms of navigational skills,” explained the 24-year old Swiss skipper, who finished twelfth in the 2016-2017 Vendée Globe. “Fred comes from a racing background and will offer his skills in analysing the weather and strategy. With him, I know everything will go well on board.”

When the Mini spirit enters the IMOCA class 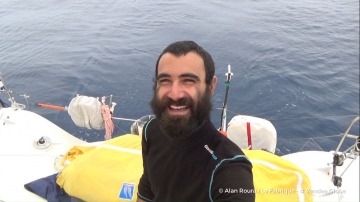 In other words, they are highly compatible in terms of ability and they get on well together. Frédéric Denis will be racing in the Figaro circuit next year and is aiming for the 2024 Vendée Globe. “I think that by working with Alan, it will be useful for both of us thanks to his ability as a sailor and the ease in which he has managed to achieve what he wants and my technical experience and navigational skills. We mustn’t forget too that we get on well together and share the same values with the Mini spirit, which we think is essential when competing in a double-handed race.”

In July, the two skippers will start to train together on a Figaro, so they can find their feet and to ensure that things come naturally on the IMOCA once La Fabrique II has been relaunched and before qualifying for the Transat Jacques Vabre. On 5th November, they will head for Brazil aiming to get the most out of the Swiss sailor’s new boat (before she goes in the yard to be adapted in early 2019). In the Transat Jacques Vabre, the duo Roura/Denis will be aiming to make it to the podium in the non-foilers. Alan Roura: “We don’t yet have the final list of competitors in our category, but it looks like being a great line-up. Our idea is to see how we measure up against other boats from the same generation as ours and to get a good result in the non-foilers. This is a great challenge for the first race on La Fabrique II and I’m really looking forward to it.”

Sam Davies back for the 2020 Vendée Globe