SMA removing the foil for the double-handed transatlantic race

After eight weeks of testing the starboard foil fitted to SMA, Paul Meilhat and Gwénolé Gahinet have finally chosen to set off with traditional daggerboards in the 2017 Transat Jacques Vabre, which will start on 5th November. Work will begin on refitting the straight boards, while other improvements will also be made.

SMA will not be using foils this time. While it seems obvious to everyone that the foils offer phenomenal acceleration capabilities to boats, including monohulls, the experience of Paul Meilhat and the Mer Agitée team was not completely convincing. 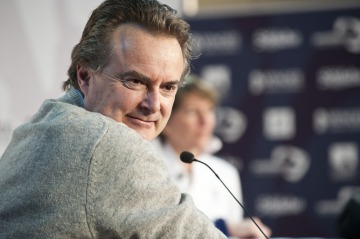 © OLIVIER BLANCHET / DPPI / Vendée GlobeTo be more precise, it was the shape of the foil, built in 2015, which was not approved. “The foil was designed at a time, when boats were just starting to use them and everyone was feeling their way,” explained Marcus Hutchinson, Director of the SMA ocean racing programme. “We told ourselves we needed to try something, but with the constraint of not modifying the boat.”

Paul Meilhat explains that “the foil did not show that it offered enhanced performance, but this was a really fascinating experience. During the whole of the training phase, we carried out studies to enable us to learn more about the way the boat behaved. This process was also very useful for the technical team, who managed to get a wealth of information about the how to modify the daggerboard housing and the systems.”

Five weeks in the yard
Five weeks of work is now due to be carried out on SMA. This entails changing the bow sprit, saving weight on board, changing the electronics and some work to optimise her. More importantly, SMA will be losing her four ballast tanks on each side to fit in with the class rules drawn up for the last Vendée Globe. Finally, some new sails (J2 and J3) will be delivered shortly. 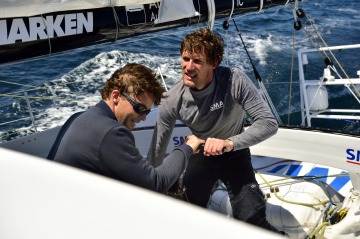 For the time being, the SMA company is still alongside Paul Meilhat until 2018. Without wishing to predict what may happen, this date also helps explain the decision to abandon the idea of using foils in the next Transat Jacques Vabre and the 2018 Route du Rhum. However, this should not change our opinion about the potential of Paul Meilhat and Gwénolé Gahinet in the Transat Jacques Vabre.