> News > What really matters when building a new generation boat

We met up not far from the Arc de Triomphe in the offices of Corum Origin, a young property investment company that is on the way up, and which is funding the construction of Nicolas Troussel’s future IMOCA 60, Corum L’Epargne.

For his first attempt at the Holy Grail, the talented sailor from Morlaix Bay has benefited from some particularly favourable conditions: a sponsor ready to invest 14 million euros over four years (6 million to build the boat, 2 million per year for running costs); a charismatic boss, Frédéric Puzin, who was charmed by the sailor’s temperament. Troussel is known to be bold in his choices out on the water and he is someone who never minces his words. There is atalented architect, Juan Kouyoumdjian, who has won just about everywhere but is still looking for a first victory in the Vendée Globe. Also present is the build manager, Michel Desjoyeaux, who won the race in 2000-2001 and 2008-2009; and there is the project leader, Greg Evrard, ex-director of North Sails France, a likeable chap, and someone who sticks to their principles. The big guns are out.

With such temperaments, everyone spoke very openly. A budget to become a potential Vendée Globe winner, a top class team and the desire to share everything (or almost): a dream opportunity to explain how to perform well aboard an IMOCA, while attempting not to get bogged down in some highly technical vocabulary… 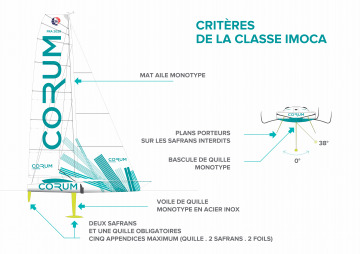 © JB Epron In order to ensure that all the boats compete on a fairly level playing field, the only boats allowed to compete in the Vendée Globe are designed to the IMOCA rules which are drawn around a set of dimensions and technical constraints which all the competitors must respect but which they are able to apply whilst being allowed small variations.   The class rules are referred to as Open as all the details of each boat will not be the same.  Is it easy to play around within these rules? “If we didn’t have all those constraints in the rules,” explained Juan Kouyoumdjian, “We could have been much more imaginative. We spend a lot of money dealing with problems linked to these constraints: sometimes we have come up with highly convoluted results, while we could have kept things much simpler. It’s always tricky keeping things simple.”

HULLS
Edition by edition the hull of the 60 footers racing the Vendée Globe has continued to evolve. Naturally now they are very different from the narrow, slim, rounded hulled boats of the first editions of the Vendée Globe. Now the shapes are much closer to the computer generated models, gaining much more all round power and volume. Whether they have had a blunt or pointed stem, high or low freeboard, wide or narrow beam, big, powerful stern sections, the pursuit of power and speed, whilst minimising drag has been the objective.

Now with the arrival of foils for the 2016-17 edition the hulls for the upcoming edition are designed to be assisted by foils. Now the foils create a lateral force and a lifting force and the hull has to be shaped accordingly, reducing drag, supporting all the increased loads – the mast and rigging and the fully loaded foils. 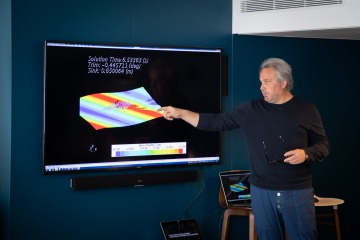 © Eloi StichelbautOn Corum L'Epargne, the hull is from the same mould as Sebastien Simon’s Arkéa-Paprec, the designer Juan Kouyoumdjian explains its logic: "It's a very different hull to what we've seen before. As the boat will often be on her foils with a 'bump' towards the back, but otherwise a virtually flat bottom. The "bump" is a bump.” And to lower the centre of gravity still further, the design office have managed to lower the mast base and the outriggers about forty centimeters.

Construction of the boat started in the spring. The hull strength is of paramount importance whilst keeping weight down. “Because we have been building IMOCAs since early 2000 we have made gains in performance because we have built more and more boats, each time gaining a better understanding of structural calculations and we have made real progress in the sampling of materials.” Says Michel Desjoyeaux, boss of Mer Agitée. And the power has continued to increase, in 2000 on his winning PRB it was calculated at 33 tonnes/metre and on 2008’s victorious Foncia it was 25 tonnes/metre.  “And now we are strengthening the boats even more because with the increased speeds the impacts on the hull become ever greater.” Says Desjoyeaux, “And by comparison the modern day IMOCA is faster than the ORMA trimaran of 20 years ago.”

FOILS AND THE KEEL

© JB EpronWhen the boat is at full speed it is supported on the foil. The keel is the only remaining part of the boat in the water. The rudders meanwhile are not allowed to generate lift. It is important that the foil is stable and strong and that the keel creates as little drag as possible. It is all about how all the elements work together, the foils and the keel – which cants since 1991 thanks to Desjoyeaux and the designers Pascal Conq and Jean-Marie Finot.   “The boat ‘leans’ on the foil which creates a righting moment which when it is shifted downwards becomes lift.” Says Kouyoumdjian, “The idea now is to reduce the weight on the keel bulb and then we realize that as we do that so the righting moment is the same for less keel angle.”  The challenge is to create a bigger lateral force on the foil but the more lateral force there is the less effective the vertical force is.

The foils which are becoming more and more popular, such as the new ones on Sam Davies’ Initiatives-Coeur are the so called ‘Dali’ foils – elongated whiskers which were proposed first by the designer Guillaume Verdier. These modern foils work variations of the rake, the angle of the tip of the foil and the length of the shaft but the work right now is understanding is the risks of using such foils at 35 knots when cavitation and ventilation occurs. A lot has been learned in this area from the America’s Cup, but what does all this mean for the IMOCA skipper? “Foils are worth a full week racing around the world”, summarises Kouyoumdjian succinctly.

THE ENGINE : SAILS
The sail package has been the subject of many studies by Mer Agitée and Corum's technical teams. The sails have to be more efficient at a wider range of speeds whilst also being capable of holding their shape under greater loads. All this has to be achieved with the number of sails allowed being reduced to eight. Now whole aero package – the rig and sails – is constantly developed from the very beginning, looking at the potential crossovers – that is the useful range of the different sail sizes in terms of the wind strengths and angles.

"Their design is very important. You have to integrate together the whole aerodynamic subject and the foils.” confirms the Franco-Argentine architect. “For me it's impossible to design an IMOCA without an idea of the sail package, what the engine will be!” 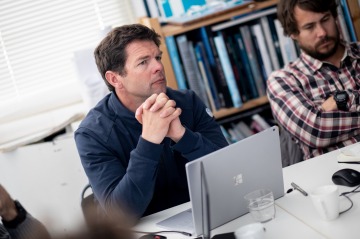 © Eloi StichelbautIn fact it has now been sail many times already. The human on board, the solo skipper, has become the limiting factor, at times acting as brake rather accelerator. Subject to ever more fatigue, stress and the physical battering and bruising which comes with the awkward, sudden movements and slamming of the boats the sailor’s wellbeing needs to be factored in,

“It is how the skipper sails the boat now which sets the performance.” Concludes Juan K. “Sailors need to know exactly how it is going to be. Nico Troussel, in this instance, will make his choices for his ‘living’ pod. The intention is to make life easier by simplifying their environment. That can be about reducing wherever possible sharp corners and points, but also keeping the skipper as warm and as dry as possible is sure to deliver performance gain in the long term.”

All consider that the 2017 record of Armel Le Cléac’h, at 74 days, should tumble on this next edition.  Eyes shining, Juan K attests, “The latest generation IMOCA will reach top speeds of 40 knots and average more than 20 knots for long periods in favourable conditions. Modelling now shows the possibility of going below 70 days.”