From the Mini-Transat to crewing on TP 52s, those sophisticated boats which bring together rich owner racers in closely fought contests, Clément Giraud has been through practically everything. From being crew as and also a top preparateur working on ORMA trimarans, to going aboard a type of racing catamaran with the explorer Sébastien Roubinet to discover the NW passage, it is this variety of experiences that affords him such a solid base that encourages him to step up to the ultimate challenge and compete in the Vendée Globe. We met up with a sailor with an unusual background, but who has so much going for him… 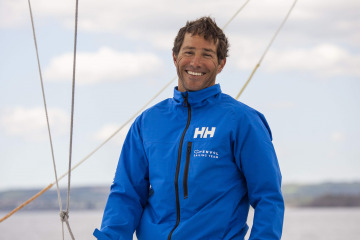 Your first experience of ocean racing?
“Without any doubt, the 2005 Mini-Transat. I bought Sébastien Roubinet’s prototype and worked on her to make improvements by myself. Doing the Mini-Transat teaches you to be independent in all sorts of areas. From what I have seen, in the Vendée Globe, you have to spend a lot of time doing little repair jobs and taking care of the boat. I think that today is one of my strong points.”

The idea behind the project?
“It’s a low cost project. We’re just a small team of four, but we all feel deeply involved in the project. I’m lucky to be surrounded by skilled enthusiasts. Our guiding principle is never to forget anyone. Someone who lends us a helping hand, an investor, who backs us at whatever level, everyone is welcome. We are obsessed by that idea. We tell ourselves every day we have to keep pushing ahead. Whatever ultimately happens with the project, whether we make it to the end or not, we will all have learnt something and grown up”

The hardest part?
“It’s not so much sailing an IMOCA. It’s more a matter of size and planning ahead. The most complicated thing is the change in status that this adventure imposes. I shall be going from being a sailor to a business leader. That means respecting the idea behind the project, taking care of things on a daily basis, continuing to look for additional funding to be able to continue the adventure. All of that at the same time.”

Your sporting goals?
“You need to have some. I know we have a good boat (Vincent Riou’s former PRB from 2008, which became Akena Vérandas, then Initiatives Cœur). I’m not pretending I’m going to be up there with the frontrunners, but I want to do well in the middle of the rankings. So far, we have been more or less on target. I must admit I like the idea of setting up a project where there are so many parameters to take into account. I’m not sure I’d feel at ease in a very big team. I sometimes get the impression that sailors are stuck more and more often with the role of merely driving the boat.”

Your relationship with the other competitors?
“When you come up from the South of France and arrive in Lorient, it feels like you are entering a different world. It feels like everything here is dedicated to ocean racing. Having said that, we got a great welcome here from the teams. That’s maybe down to the fact that we really want to remain humble and that it is out on the water that we want to confirm our ability. It’s hard being in Toulon, as you don’t get that impetus from all the ocean racing teams pulling together. On the other hand, we’re not influenced by them and we do things our way.” 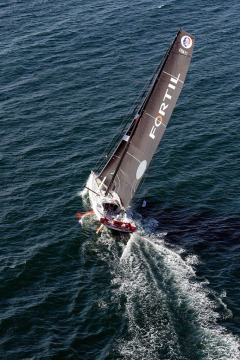 A project made in Toulon?
“That regional aspect is essential for me. If what we achieve manages to develop a certain culture of ocean racing in other youngsters down there and in local businesses, we will have done what we wanted. You can feel that there is the demand for that. Last week over four or five days, we managed to get around 300 people out sailing on the boat. 300 people who will be able to tell others what it is like to sail at 15-20 knots on this size of boat. They will become ambassadors for the project. What that means is that we are bringing Toulon closer to Vendée.”